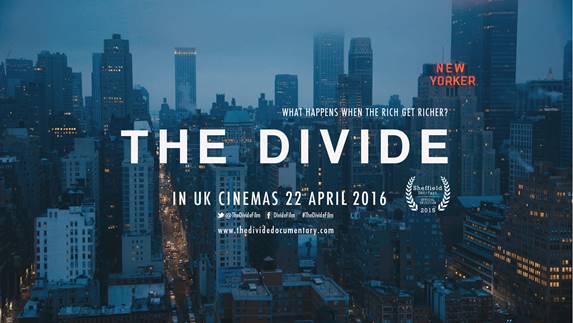 Katharina Round’s debut feature documentary is based on The Spirit Level by the epidemiologists Richard Wilkinson and Kate Picket, a study about the relationships between rising income differences and their social results – all captured in graphs and charts.

Round was obsessed with mathematics as a teenager and saw the science “as a language, you just have to know how to read it.” After reading The Spirit Level, she decided to put human faces to the statistics, in a way translating the figures into a language we all speak, “because the book was at its heart a story of how big picture economics can pull very personal, individual levers in all of us and have an impact on how we live our lives”.

Round has chosen seven individuals in the UK and the USA, who are reacting in their different ways to the changed economic landscape. Alden is a psychologist, but he is not involved in personal cases, preferring to lecture Wall Street executives on how to maximise their income and personal happiness. In Glasgow, rapper Darren just tries to survive and stray off drugs. Rochelle, who lives in Newcastle, works as a carer. On workdays, she only sees her two kids when she wakes them and puts them to bed at night. Somehow she has managed to accumulate a debt of £4000, but her main concern is that her work is underappreciated by society as a whole.

A high income does not guarantee happiness; quite the reverse: Jen in California is living in a ‘dream house’ in a gated community near a golf course. Her neighbours don’t talk to her, she is simply not “one of them”; not surprisingly because she mocks their expensive golf-carts which cost $20000 dollars a pop. Janet, a Walmart employee in Louisiana, is comparing her shop assistant income with that of the shareholders, the ratio being about 1:1000. And Leah, working in a KFC outlet in Richmond, Virginia, feels so stressed out that her customers worry about her health.

Globalisation and deregulation, together with a great shift in power towards employers, are the main factors which have changed the political scene in the UK and US, since Thatcher and Reagan came to power in1979/80. But they were only the trailblazers; whoever followed them since the late ’80s, has slowly built up social divisions which followed the economic ones, so changing the way we live: from mental and physical health to increasing violence and addictions. – these drastic changes for the worse, underpin the lack of cohesion in a society where, in the USA, the 0.1% of the population owns as much wealth as the bottom 90%.

Another factor is the ‘squeezing’ of the middle classes, where the need to keep up appearances and support children, who return to live at home after university, have led to families taking on enormous debts. But in the UK it is more punative than ever for the small business to take on new staff, such are the regulations in place.

Round has tried a lyrical and sometimes even poetic approach aiming for humanity in her doc, which was crowd-funded on a low budget. DoP Woody James’ strength are the intense close-ups and panoramic shots of the environment but the indie feel, keeps it real. Overall, The Divide is a serious contribution to the inequality debate, but fails to set out a blueprint for real change. It seems there will always be the rich and the poor and that will never change. AS

THE DIVIDE is in cinemas from 22 April and nationwide on 31st May http://thedividedocumentary.com/