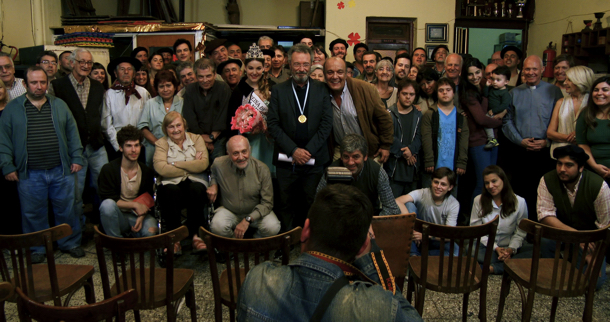 When an Argentinian Nobel prize winner returns to the village of his birth he discovers a lawless Wild West, or has he just become “over-civilised”.

This pithy premise underpins the latest from Argentinian directors Gaston Duprat and Mariano Cohn. It stars Oscar Martinez (of Paulina and Wild Tales fame) as the world-weary and emotionally avoidant author Daniel Mantovani, who returns to a remote village about six hours drive from Buenos Aires, to accept a medal. Having left there many years ago, he never felt the impetus to go back having made a successful writing career in Europe where he lives in palatial splendour in the lush hills of Barcelona’s Tibidabo.

Written by Gaston’s brother Andres Duprat, THE DISTINGUISHED CITIZEN is a tightly-scripted, insightful and often hilarious satire with echoes of Juan Pablo Rebella and Pablo Stoll’s 2004 comedy Whisky with similar themes of parochial pettiness and cultural awareness. The tone is always light but touches upon some dark home truths. The elegant framing and architectural sensibilities makes this a visual pleasure, Maria Eugenia Sueiro’s interiors reflecting a faded seventies aesthetic.

The film opens as Daniel is delivering a trenchant rebuke at the acceptance ceremony mocking the Nobel Prize for Literature in Stockholm. Fast forward five years and he is on the plane to BA where a taste of his future tribulations arrives when his airport taxi driver breaks down in a field, hours from Salas, forcing him to spend the night in the middle of nowhere round a campfire lit with one of the pages from his recent novel. The following morning that same book comes in handy as lavatory paper – and we all realise where things are going.

The narrative unspools in five parts – for no specific reason – as Daniel goes back in time to a homespun and unsophisticated community stuck in the past. This motley crew respond entirely inappropriately treating him like a local soap star rather than an intellectual introvert. He bumps into his old girlfriend Irene (Andrea Frigerio) who is now married to his butch friend Antonio (Dady Brieva), a mean dancer and an even meaner game hunter – a talent that plays out in Daniel’s hasty departure in the final scenes. The film centres on the small-town mentality that really rears its ugly head as the story develops, the inhabitants gradually turning the writer from hailed hero to vilified outsider in their collective mean-spiritedness.

This is an enjoyable and intelligent piece of cinema, dark and deadpan situational comedy arises out of bizarre encounters and bitter ironies (much in the same vein as those of the recent Toni Erdmann). The film leaves us with some memorable maxims to reflect on. “making things simple is an artistic kindness” is a choice takeaway from the role and often poignant indie gem . MT