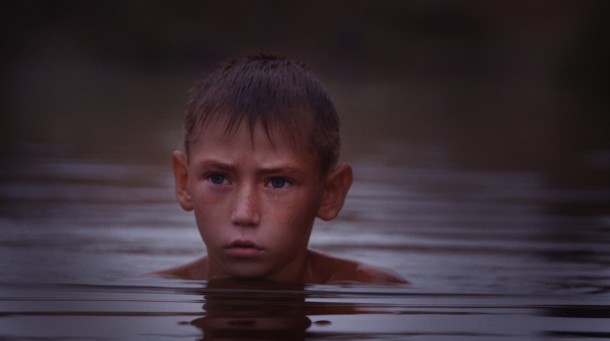 The Distant Barking of Dogs is set in Eastern Ukraine on the frontline of the war where in the spring of 2014, an armed conflict erupted between the government and pro-Russian separatists. After almost a year of widespread fighting in the eastern region of Donbass, a young boy survives with his grandma in the village of . Poignant and poetic, the film follows 10-year-old Oleg day to day life as he gradually loses his innocence beneath the pressures of war, rather like the character in Ivan’s Childhood.

As locals gradually leave the village for safety, Oleg and his cousin Yarik play in the ravishing rural pastureland, often strewn with the detritus of conflict. Hnutove is fast-becoming a ghost town and we are made acutely aware of the importance of human relationships, and how vital the constant reassurance of people and animals is for emotional wellbeing, as Oleg and his grandma Alexandra – who have nowhere else to go – are thrown together. Oleg (who mother is dead) must grow up quickly in a world threatened by the challenges of hostility and privation. And although the boy rises to the occasion, his generation of young Ukrainian children will clearly bear the scars of war for many years to come.

Behind the rough and tumble of play, there is always a unsettling feeling of doom and Lereng Wilmont delicately dramatises how the kids are actually living in a war zone, where death lies in wait at every turn in a conflict that shows no sign of abating, despite the often calm and bucolic surroundings, As the film wears on the tone becomes more bleak as the kids inspect a handgun by belonging to a local teen called Kostya. A disturbing scene shows them shooting at frogs in a well, and later Oleg is scuffed by a passing bullet.

There is a close intimacy to Lereng Wilmont’s camerawork illustrating just how babyish these children still are, their little faces and staring eyes hardening as they confront scenes that would mortify most adults. We feel for these tiny souls alone in the face of evil. A fitting folkloric score sounds gently in the background, punctuated by occasional bomb blasts. This is a resonant and evocative documentary that sheds light on the deeply human experience in contemporary war zones. MT