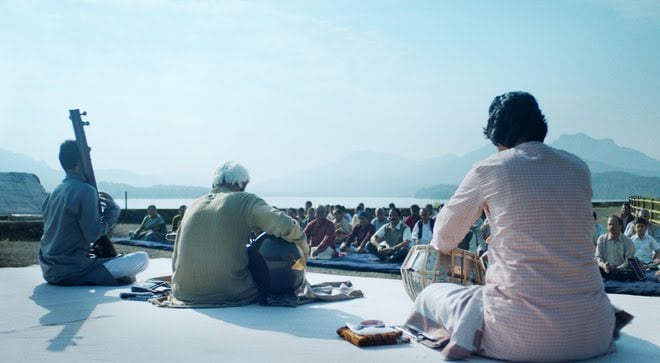 Chaitanya Tamhane dedicates the same intensity and sense of detail to The Disciple as his first feature Court (2014). This impressive second feature must surely be the definitive film about Indian Hindustani classical music, and that is something for Tamhane to be proud of. A film about devotion to the task at hand and focused perseverance is refreshing in these modern times of quick fix celebrity and overnight success.

The main character Sharad Nerulkar is a rather doleful young man determined to perfect his knowledge and skills in this most complex and subtle of traditional musical styles. And although the actor does his best to get us on board with his emotionally pent up loner, he remains a detached and avoidant soul, given to binge-eating and bouts of self-righteousness.

The task he undertakes is a difficult one, Tamhane reminding us that artistic expression relies on a relaxed mind and body to flourish and flow. His musical guru Sha Guruji (Arun Dravid) impresses this upon his rather tense student who is so desperate to pay his bills and look after his future in this classical field that he slightly misses the point for most the drama.

The musical excerpts performed by skilled practitioners are quietly mesmerising, often reaching fever pitch. But the most enjoyable scenes revolve around simple everyday life in Mumbai when Tamhane takes the camera roving to unexpected and delightful places. The musty heat of the night is almost palpable during Sharad’s slo-mo motorbike rides on the city’s highways. It’s the only time he seems really at peace. MT