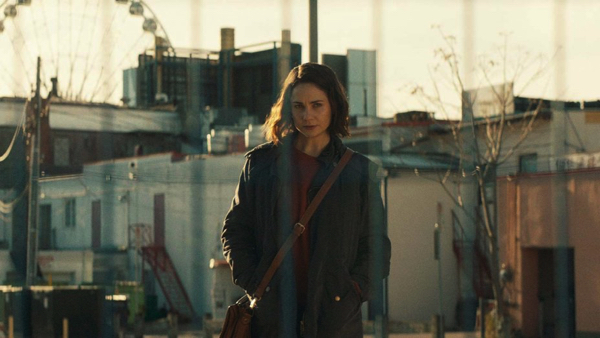 Tuppence Middleton is the intriguing focus of this Canadian-set mystery drama that sees her investigating a haunting childhood event in the Clifton Hill area of Niagara Falls. David Cronenberg plays a mesmerising podcaster who joins in to unlock the past in a thriller that is interesting to watch rather than gripping as a psychological whodunnit.

In his third feature Canadian filmmaker Albert Shin has developed a distinctive cinematic style with lurid echoes of David Lynch, Hitchcock and even Cronenberg himself. There’s a chilling vibe to the richly textured, atmospheric drama with its characters who feel like real people you might even know, and you certainly feel for Middleton’s Abby who still keeps her edgy allure. The story develops in an offbeat but often contrived way and what slowly comes to light is predictable until the riveting reveal.

Shin knows the territory well. He grew up in Niagara Falls where we first meet Abby working as a hotel receptionist in this seedy off season tourist centre. Nothing is what it seems, and Abby gradually becomes an enigmatic woman dogged by a history of mental illness clouding the truth behind that  lakeside outing with her parents when she saw a boy with a patch over his eye, being kidnapped.

Back in the present and Abby and her sister (Laure/Gross) have recently lost their mother and are back in town with the family lawyer (Dan Lett). The girls now own a motel and a sale needs to be concluded on the rather distressed property. The sibling rivalry feels genuine here and naturally they fall out over their legacy. Initially we are on board with Abby, rather taking her side of events, until she starts to give off unreliable vibes after a chance meeting in a bar with a guy (McQueen) who turns out to be a detective. A one night stand goes pear-shaped but he takes up the case of the missing boy and further investigations soon reveal sleazy secrets from the past, and some characters who you wouldn’t trust to post a letter. These include the infamous Magnificent Moulins (Marie-Josée Croze and Paulino Nunes) who turn out to be the parents of the missing one-eyed boy whose disappearance underpins the narrative. Also key are a couple of raddled old-timers (Elizabeth Saunders and Maxwell McCabe-Lokos) who seems to play a part in the boy’s murky fate.

An evocative jazzy soundtrack gives the film part of its unsettling allure, Catherine Luke creating neon-tinged visuals that reflect a tackier side of the lakeside resort, this is a captivating film that casts a certain spell. MT