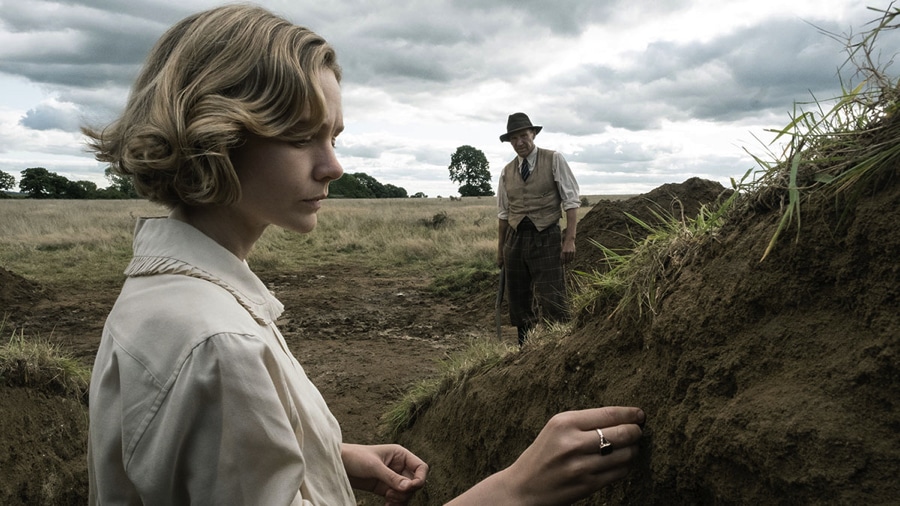 This tender and touching tale about loss and the fragility of life takes place in the soft landscape of Suffolk just as England is entering another World War in 1938.

The Dig is ostensibly about the discovery of an ancient burial site at  Sutton Hoo but its historical significance pales into insignificance and the human story is what we remember, sensitively brought to life by Moira Buffini’s skilful adaptation of John Preston’s novel, and Carey Mulligan’s deeply affecting performance as young world-weary widow Edith Pretty who lives at the Hoo with her young son Robert (Barnes).

The repercussions of the Great War are still being felt even in rural Suffolk where Edith maintains a noblesse oblige approach despite her life-limiting heart condition brought on by rheumatic fever. Robert is gently traumatised by the thought of losing another parent, in a household where everyone is crying silently but putting a brave face on things. Ralph Fiennes gradually becomes an unlikely saviour as the stern, pipe-smoking amateur archeologist Basil Brown who Edith hires to investigate mounds of soil on her land. Robert takes very well to the individualist Brown, but it gradually emerges he is married to local lass Mary Brown (Dolan) and that’s another sad story.

Naturally being England, emotions are well buttoned-up despite the balmy summer setting; director Simon Stone possibly had LP Hartley’s The Go-Between in mind with his imagining of events, Buffini making Mrs Pretty decades younger than the book, thus adding a frisson between her and Basil.

But that’s not the only touch of romance going on. There’s a low key flutter between Edith’s cousin Rory (Johnny Flynn) and Lily James -who is curiously underpowered as Peggy, the sexually starved wife of a (gay) RAF officer (Ben Chaplin, looking worried) – although it certainly provides light relief from the rather underwhelming burial discovery which brings with it a motley crew of ‘official’ specialists from London headed by British Museum expert Ken Stott. Pulling rank he places the site under Government control, although Edith is adamant that Brown should finish what he started, especially as he is nearly killed in a landslide.

Drama also comes from the looming shadow of war. A plane crashes in a nearby lake, Rory trying in vain to rescue the pilot. And although Edith is fading away slowly she still lights up every scene with her understated class and decorum, keeping up “a good show”, and trouncing Peggy’s discrete ecstasy with Rory – yes, they do get a coy minute of passion just before he leaves to join the RAF. MT