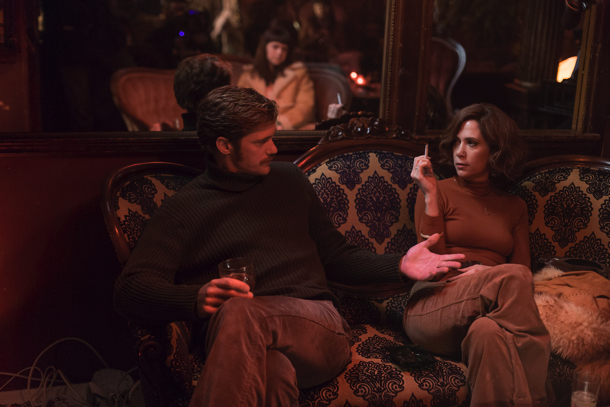 There are a number of films out there in the cinematic plains that are alleged to “rock”. There are probably some lost souls who claim that Cameron Crowe’s ALMOST FAMOUS “rocks”. Or perhaps some slightly more informed folk who say that DAZED AND CONFUSED “rocks”. Even typing the words feels a little mortifying. Marielle Heller’s THE DIARY OF A TEENAGE GIRL – that won this year’s Sundance cinematography award and is based on Phoebe Gloeckner ‘s book- really does sort of rock. There’s just no better word for it. In a ‘boot through the saloon door, balls to the wall’ kind of way. It’s not just a film about enjoying sex, it is (God help us all!) a film about a young woman enjoying sex. And not only that, it announces Heller as a zest fresh, ballsy first time writer/director, while introducing American indie cinema to an electric new star.

Bel Powley is that star. She jumps from her small screen role in BENIDORM (whatever that is) to play Minnie, the titular teenage girl. DIARY opens on Minnie’s first post-coital strut; slow-mo, eyeing up the world, flares waving from side to side. We’re back in the 1974; Patty Hearst’s just been kidnapped; things are getting a little wild. Minnie takes us through her first sexual experience, sleeping with her mom’s boyfriend Monroe; a dim, handsome golden retriever of a man, played by Alexander Skarsgård. She’s swept away, but is it him she falls in love with him or is it simply the sex?

Her best pal is a skinny blonde, so Minnie naturally considers herself fat and ugly (who doesn’t at that age). But sex just seems to liberate her from all that. So we follow Minnie as she goes off trying new things, leaving a trail of men behind her, making pals, taking drugs and dancing to rock and roll. She’s a cartoonist too and her illustrations, which come alive in the frame, also play a central role. This might all sound a bit familiar, but the cartoons- taken from Gloeckner’s original work and brought to life beautifully by the film’s animation team- are more in the vain of Robert Crumb’s grotesque human comedy than anything we saw sprouting out of Joseph Gordon Levitt and Zooey Deschanel in (500) Days of Summer.

So Minnie’s an artist, and a badass, and she smokes pot and listens to Iggy Pop. Sounds horrendous but by some sort of miracle, it’s not annoying at all. Perhaps it’s a matter of attitude, or simply offering up two fingers to the world.

And how rare and special a thing that is. A badass story finds a badass director and an equally badass star. Bel Powley is pure lightning in a bottle; bursting at the seams with strength, vulnerability, sexuality, and youth. That (500) Days mention really is telling. By comparison, Heller’s film is like a Sundance EASY RIDER. Despite being set over 40 years in the past, it leaves that last generation of indie film looking strangely creepy and desperately old-fashioned. A last nail, perhaps, in the manic-pixie coffin.

The film screened in the Berlin Film Fest’s Generation sidebar. A program selected for young people aged 14 or over. We can only hope and pray such leniency is awarded when national ratings boards catch the scent. Whatever the case, it seems safe to wager that by this time next year, Bel Powley will be everyone’s favourite new star. Expect inundated Facebook feeds whenever Fox Searchlight see fit to release it. Hop on the wagon quick, those seats are gonna go fast. Rory O’Connor.