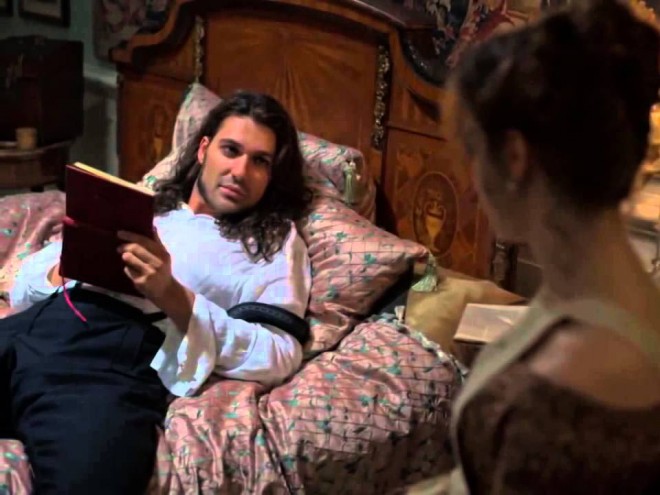 After some interesting outings with experimental fare and psychological dramas, the most successful being Boxing Day, Bernard Rose returns to the musical biopic genre where he found fame twenty years ago with Immortal Beloved, with Gary Oldman’s dynamite turn as Beethoven. Sumptuously mounted but poorly cast, for the most part, in THE DEVIL’S VIOLINIST he has selected David Garrett for the lead. While Garrett is a popular figure for his musical talent and raffish good looks, his acting lacks the charisma and seductive elan needed for the role of the maverick Italian music-maker, Niccoló Paganini.

In 1830 things are not going well for Paganini. The opening scenes showcase his darkly tousled locks adorning the satin pillow in a hotel where he has failed to pay the bill. In comes a saturnine Urbani (Jared Harris, with a curiously rasping voice more akin to League of Gentleman’s Papa Lazarou than an Italian benefactor), posing as a dubious financier and offering his services as a manager. Before you can say ‘Machiavelli’, success arrives in spades as Paganini cuts a musical swathe through Europe womanising as he goes, while Urbani, ever at his side, looks on hissing “take your medicine”.

In London, a strand of forced feminism is interwoven into the narrative referencing a groundswell of apparently disenchanted (or spurned?) women seeking to ambush Paganini’s purported debauchery. Paganini coughs on oblivious and takes residence in the home of impresario John Watson (Christian McKay), his wife Elizabeth (Veronica Ferres, who we last met in Casanova Variations) and more pertinently, his ravishing daughter Charlotte (Andrea Deck). Charlotte is a budding opera singer who fails to fall for Paganini’s advances, calling him “a puffed up peacock”, and the two develop a wary friendship. Paganini also garners support against the feminist protestors in the shape of journalist Ethel Langham (a cockney Joely Richardson – to boost box office in the US). Meanwhile Paganini continues woodenly working his magic with the lovely Charlotte, against her better judgement.

While Bernard Rose tries his best to leverage the more sensationalist elements of the Paganini story, the resulting film lacks authentic conviction or even dramatic punch, emerging as just another period drama, albeit a well-crafted one; although at just over two hours it outstays its welcome, along with its misguided hero. Certainly, it is a lovely thing to watch and listen to but that alone fails to life the film out of its clunkiness in general. Garrett can’t set the night on fire with his acting chops but he’s certainly a wizard on the violin, in some of the more successful scenes. MT