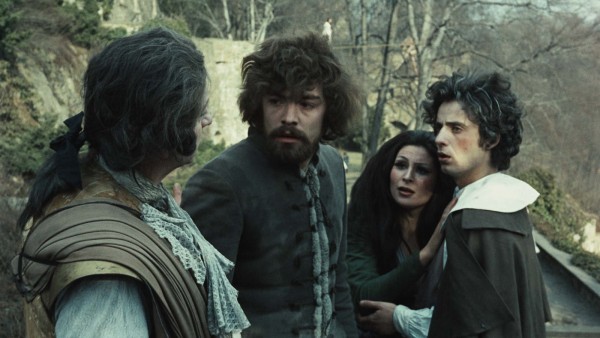 Banned by the Stalinest censors, who saw a hidden critique of life in contemporary Poland in Zulawski’s second feature, he left his homeland to shoot L’Important: C’est d’Aimer with Romy Schneider in France before going back again for On the Silver Globe, a production that was blighted by the authorities who refused to allow him to finish the fSci-fi outing. In the end, a 146 minutes version was premiered in 1988.

DIABEL is set in 1793 during the Prussian invasion of Poland. Jacub (Teleszynski) lives in a religious prison asylum, having trying to assassinate The King. A mysterious man, clad in black (the Devil played by Wojciech Pszoniak), leads him to freedom but in the process starts making unreasonable demands on Jacub, who suffers from paranoid illusions; seeing life as a feverish dream where he is forced to save his country and family. Not surprisingly, he has had a dysfunctional relationship with his relatives. Returning home, he learns that his father has just died – committing suicide after raping his daughter, who apparently had gone insane. Jacub claims to have had sex (as a child) with his mother, who now works as a prostitute nearby. Meanwhile, his sister is living with his half brother and his bride (Braunek) who is pregnant by Jacub’s best friend. This together with his paranoid state, causes him to go on a rampage of gory killings, accompanied by a nun.

The film feels like Hamlet directed by Wes Anderson; the characters are all deranged and their insanity manifests at some point during the narrative. And Jacub does not see his father’s ghost, as he is living a phantasy nightmare where the boundaries between reality and dream are fluid. His reaction to all this is to kill violently. Andrzej Jaroszewiecz (who was also behind the camera for the abandoned On the Silver Globe) creates this crazed landscape with stunning intensity and a lucid palette that illuminates every gory murder scene in a different way. Whilst the narrative is enigmatic, to say the least, the overall impression is extraordinarily evocative.

Melodramatic performances perfectly fit this bizarre plot: whilst not making sense in a logical way, the weirdness gradually develops an inner stringency – the longer Jacub’s mad reign goes on, the more we tend to see the world through his warped perspective. DIABEL is not a great film, but a very exciting experimental one. AS

KINOTEKA RUNS UNTIL 28 APRIL AT VARIOUS VENUES IN LONDON