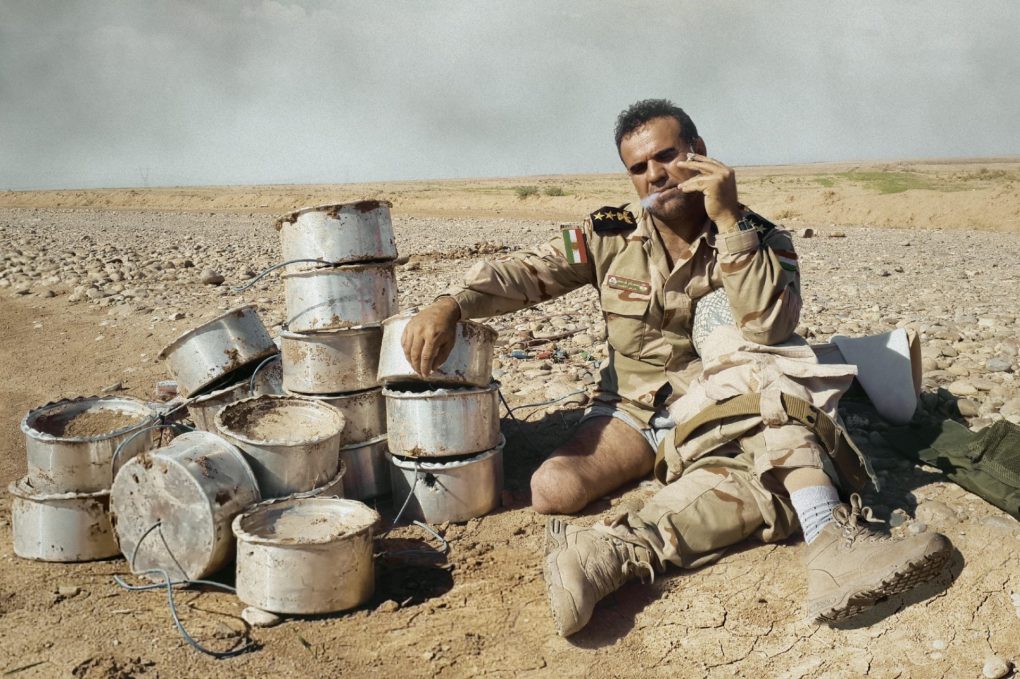 This is one of the few films has the audience in an emotional grip that lasts long after the credits have rolled and having watched Hogir Hogir’s  documentary about Colonel Fakhir Berwari, who defused thousands of explosive devices in a wartorn Iraq, one is left with admiration – but also with a feeling of huge inadequacy, however misplaced.

Fakhir Berwari, a Kurdish father of eight, was a man with a mission, or better, an obsession: he wanted to save as many lives as possible, and when he was demobbed by the Iraqi army after he losing a leg in an explosion, he became morose. Only after DAESH started its terror regime in and around his hometown of Dohok, did he find his equalibrium. And he joined the Kurdish Peshmerg army in 2014. Attaching a simple prosthesis to his stump allowed him to do what he was best at: defusing the deadly legacy of DAESH, using his bare hands to rip the mines apart, and de-activating the boob-trapped bombs in the houses with a pair of pliers and a wire cutter.

The filmmakers got access to video material from Berari’s son Abdulla, who found a cache of tapes in his father’s briefcase. These documents are from the time when Fakhir was a major, serving in the regular Iraqi army, learning his craft, being christened “Crazy Fakhir” by the American allies, whilst he disposed of bombs and mines left by supporters of the by now executed Saddam Hussain. To quote Abdulla “These tapes are action movies, but for real”. They are filmed by either Berwari himself, or his closest assistants – and capture the assault that occurred when the car carrying Berwari and his team is thrown into the air, like a toy. There are other near misses, and the tension becomes more and more unbearable, convincing that there will be no happy-end.

The DAESH troops who plant the deadly weapons, wear black, and one is immediately reminded of the Nazi black-shirts in their SS uniforms. To mine the houses of civilians is an act of pure evil, blowing them up with a signal from a mobile. But ordinary life goes on for the Berwari family: in between these rescue missions, Fakhir is phoned by a creditor, who demands payment. Then he defuses a mine, which would have blown up the whole street. It is difficult to sum up The Deminer – which won the Special Jury Price at the Amsterdam IDFA in November 2017 – so overwhelming are the images, comment is redundant. Perhaps, the joyful expression on Fakhir Berwari’s face, after re-joining the army in 2014 and returning to his mission, is the best way to remember him. AS

ON GENERAL RELEASE from Friday 27 April 2018