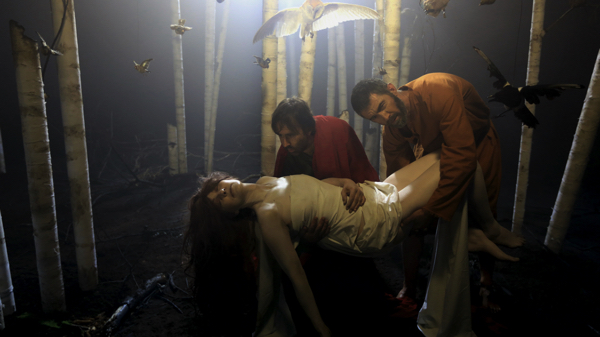 British filmmaker Roz Mortimer has poured her heart and soul into an important new documentary that uncovers another grim episode of persecution, this time of the Roma people in Poland and Hungary. Crucially, it highlights the continuing hatred of the Roma, who are still being victimised in scandalous acts of violence across the region.

Mortimer’s documentary explores the myth behind the story of The Deathless Woman, a Roma matriarch who was buried alive in the forest by German soldiers in 1942. This leads to the discovery of widespread genocide in other sites of Roma persecution such as Birkenau and Várpalota in Lake Grábler.

Here just before the end of the Second World War on 4th April 1945, 118 women and children were massacred by Nazi occupying forces, deep in the forest. Back then there was no lake, just a clearing where the dead were thrown into unmarked graves. Some time later the area was flooded and became Lake Garbler.

Mortimer clearly feels so strongly about her efforts to uncover the truth behind the genocide that she has decided to take part in her own documentary, talking us through the process of her findings, and occasionally presenting her case to a voiceless interrogator, as she tries to make sense of the lack of evidence despite sensing a strong ‘residue of emotion’ left by these unfortunate victims. “What do you do when there is nothing visible left?” she asks.

Eventually her archive research leads her to the scene of the crime in Lake Grabler where things start to come together. She meets a number of locals – amongst them is Josef, who describes how he was forced to dig a mass grave on that dreadful Spring day 75 years ago – a tough undertaking due to masses of tree roots clogging the ground.

She talks to locals Christina and Anna who in 1943 lost most of their family there. Mortimer stresses the aura inhabiting the windswept, rural area and describes being filled with a haunting sense of dread. Later, a woman called Zofia takes her to the scene of the atrocities, and shows her the indentation in the soil where there lies the skeleton a tiny bird. This serves as a tangible reminder and comes to  symbolise the souls of the ‘gypsy’ women and children who perished there.

One of these was the mythical “Deathless Woman”. Zophia describes how the Germans killed the gypsies because they had apparently stolen a pig from the village, so desperate was their hunger. According to a Roma woman who describes herself as a second generation Holocaust survivor, the mythical ‘Deathless Woman’ refused to die with the rest despite being shot at several times, until eventually she gave in only to leave a curse on the village. The Deathless Woman apparently scrambled out from under the other bodies and lived to tell her tale. As a tribute, the locals hung the clothes of the dead on the surrounding trees.

But the hatred continues today. In Tatárszentgyörgy, Hungary, it emerges that neo-Nazis murdered a Roma family in 2009. Mortimer’s internet research uncovers hate speech and video games where players are invited to gun down unarmed Roma as they run through the streets.

Enriched by archive footage, macabre dramatised re-inactions and gruesome reconstructions of the bodies in the lake – that actually look rather ghastly and only serves to cheapen the experience – the filmmaker also suffuses this grim and slightly overworked ethnographic tribute with a ghostly atmospheric soundscape that suggests The Deathless Woman woman is going to be haunting the village for some time to come. MT