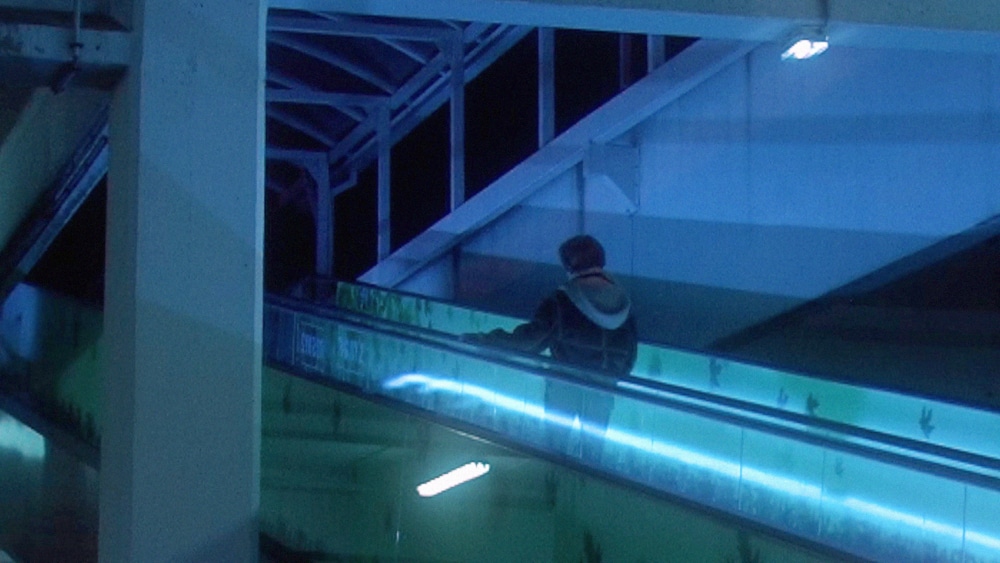 Artificial intelligence can unite us with a loved one, as we saw in the recent British sci-fi flick Archive. In his documentary debut Franco-Greek director Maxence Stamatiadis goes a step further showing what could happen in real life.

The mockumentary mishmash of art installation, archive footage, sci-fi,  and droll satire is very much redolent of recent Greek ‘weird wave’ fare. Close-up camerawork projects us forward to the near future in Paris where an elderly couple are going through the motions of everyday life. Still very much in love with her husband Edouard, 88 year old Suzanne Mouradian is addicted to sharing kitten videos and her innermost thoughts on losing her soulmate on social media through her various devices, Edouard (1929-2013) meanwhile puts up with her tender overtures, secretly yearning for a second chance as he struggles on resentfully with his pills, and his glasses, their obnoxious grand-daughter laying down the law on impromptu visits.

My own father once said to me: just because you’re old you don’t change, ‘you still have the same ideals, and romantic desires’. And Stamatiadis captures this couple’s romantic affection and closeness drenching his story in documentary-like authenticity, using his grandparents as the lead characters clearly intensifies the experience; the knowledge that life is coming to and end lacing the film with a melancholic tristesse heightened barely disguising his subversive humour with a sultry Claude Chabrol style occasional score.

The narrative slides back and forward beginning in Les Pavillons-sous-Bois in 2013 where the couple live out a claustrophobic domestic existence darkened to assist their addiction to technology. Moving on to 2024, Suzanne is now a nostalgic widow and has found an internet site (The Day Today) that bizarrely enables her to recreate Edouard, right down to that burgundy jacket he wore the time that love was in the air (“il etait si chouette”) courtesy of a volunteer ‘swapper’.

So along comes the new version of Edouard his latent dark side this time ramped up: he tools with a flick-knife and sports gaudy knucke-dusters along with his pink halo. Monosyllabic, churlish and generally unbiddable to Suzanne’s constant need to control, he even darts demonic looks in her direction while she slaves over his ‘petites tartines’ and lovely prepared dinners. While Edouard is own on his mysterious evening strolls, Suzanne resorts to her devices, describing him as “tragic”, the whole endeavour as “mal foutu” but carries on all the same with a “better the devil you know” acceptance of her new hubby.

The Day Today is a darkly delicious satire of modern life, highlighting the perils of internet dating, artificial intelligence and even our human tendency to go with the flow even when the going gets rough. MT