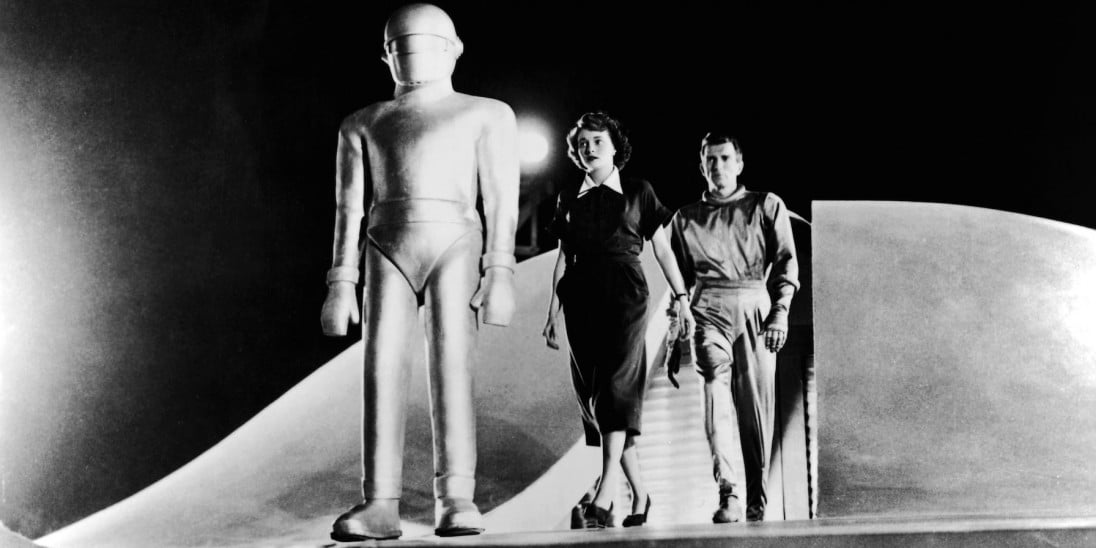 A key work of fifties science fiction recently awarded the accolade of yet another unnecessary remake, The Day the Earth Stood Still remains one the sadly few contributions to the genre made with grown-ups in mind.

Robert Wise’s classic hits the ground running with a terrific title sequence and a tingling theramin score by Bernard Herrmann (one of the few genuinely original scores ever written for a sci-fi movie) dovetailing into a still unsurpassed depiction of a flying saucer sweeping across the Washington skyline before gracefully settling in the centre of the Washington Mall.

Michael Rennie had the role of his career as the tall, personable, well-spoken Klaatu (writer Edmond North later admitted to Klaatu’s use of ‘Carpenter’ as an alias and his resurrection as conscious references to Christ). His nine-foot robot Gort was played by Lock Martin, the doorman at Grauman’s Chinese Restaurant, the tallest man in Hollywood.

Klaatu in the words of Peter Biskind is “not one of those diffident aliens who land on a farm somewhere in Iowa and takes years to make their way to Washington or Los Angeles. Klaatu means business and goes right to the top.” At the height of the Cold War Rennie’s testy remark “I’m not concerned with your petty squabbles!” is an extraordinary thing to hear in a mainstream Hollywood movie; while Albert Einstein – obviously the model for the wise Professor Barnhardt –  was also at that time a controversial figure. @RichardChatten