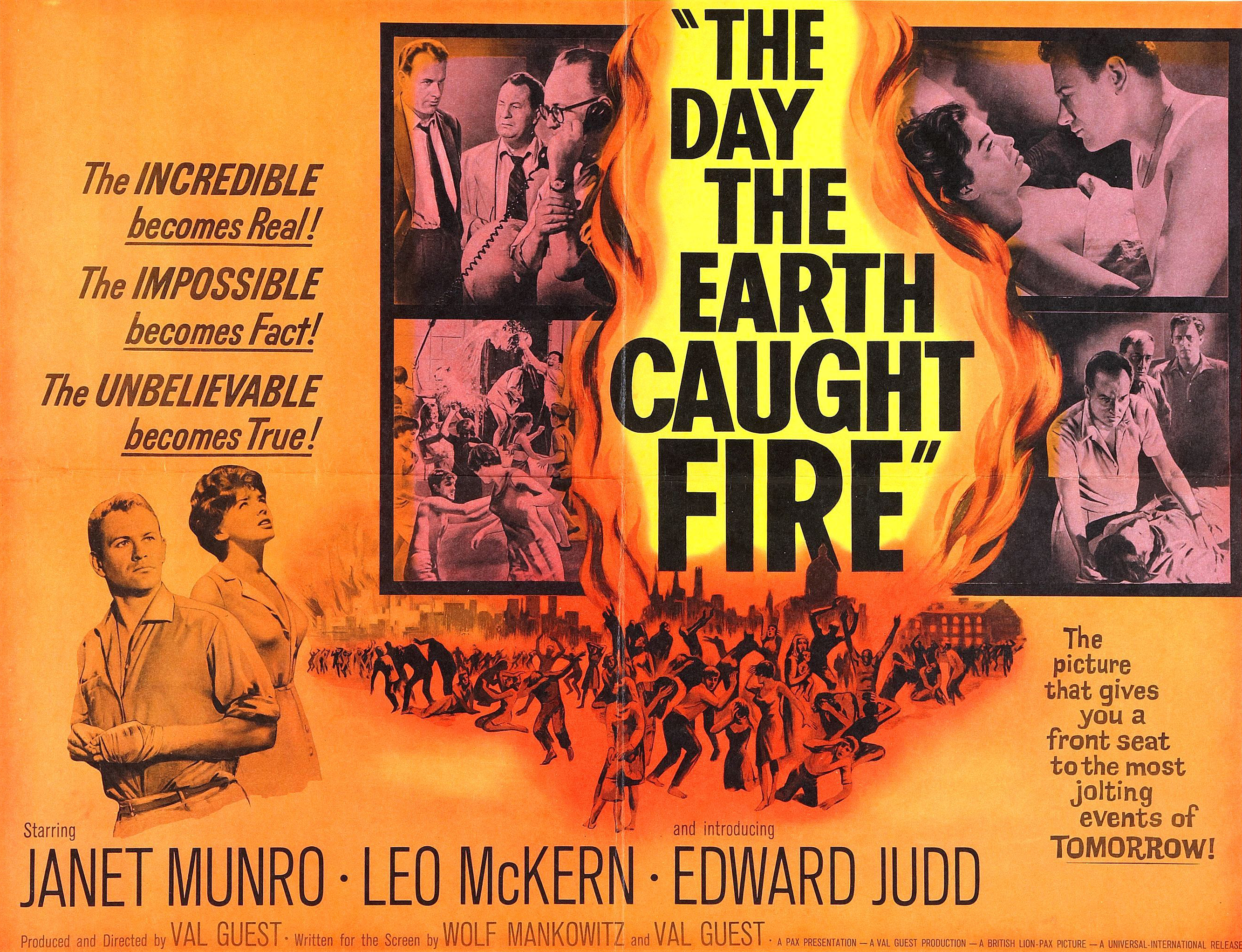 “Sunspots, what can you tell me about sunspots?” This apparently innocent question is asked by Daily Express reporter Peter Stenning (Edward Judd) in Val Guest’s memorable The Day the Earth Caught Fire. Stenning is an alcoholic recovering from a bitter divorce, and his job is on the line. The answer to his question proves to be life changing. Stenning’s relationship with Jeannie Craig (Janet Munro), a telephonist at a Government ministry, enables him to discover a political cover-up. The force of constant nuclear testing has knocked the world off its axis. An 11% tilt means the earth is being rapidly propelled towards the sun.

London begins to experience intolerable heat, water is rationed, people fall ill and die. A young reporter collapses in the newspaper office. He’s examined by a doctor who tells the staff that the man’s a typhoid victim and that everyone will need to be injected. An indignant Stenning protests, “You have to be injected? Against what, the end of the world?” That’s one of many barbed comments flung out by Daily Express journalists and directed at a controlling political authority.

Wolf Mankowitz’s excellent script revels in its taut cynicism. Yet Mankowitz and Guest also carefully create very credible and sympathetic characters. This gives The Day the Earth Caught Fire an intimate intensity that sets it apart from the average apocalyptic disaster movie. It is intelligently conceived science fiction comparing favourably with a British literary tradition of dystopian futures (e.g. the novels of John Wyndham). Leo McKern is superb as Bill Maguire the veteran reporter. I love the scene where Stenning tells Maguire what’s really going on. Leo McKern’s reaction and line delivery is priceless. “They’ve shifted the tilt of the earth. The stupid, crazy, irresponsible bunglers. They’ve finally done it!”

Apart from the whipsmart dialogue, Val Guest’s direction and his real London location film work is also impressive. A staged CND demonstration in Trafalgar Square is mixed in with newsreel footage. A heat-mist travels over the Thames and Battersea Park. Whilst the streets, round Fleet Street, are near–deserted. These scenes have an authentic documentary realism recalling Guest’s 1960 Manchester crime drama Hell is a City. Yet a simple and great stylistic touch tops even their power. The beginning and end of the film is shot in a brownish orange tint effectively conveying not only the sense of the world spiralling into the sun but paper (The Daily Express newspaper itself) turning brown before catching fire.

The Day the Earth Caught Fire is very much an early sixties film communicating a palpable fear of the consequences of the nuclear age. Yet viewed today, and despite our still considerable nuclear arsenal, it feels like a prescient statement about climate change and global warming. Some off screen narration, about the fate of the planet, does have a religiosity that’s slightly sentimental. And a few special effects now look dated. But they don’t seriously flaw this haunting classic of British SF film. Alan Price.

NOW AVAILABLE ON Blu-ray courtesy of the BFI