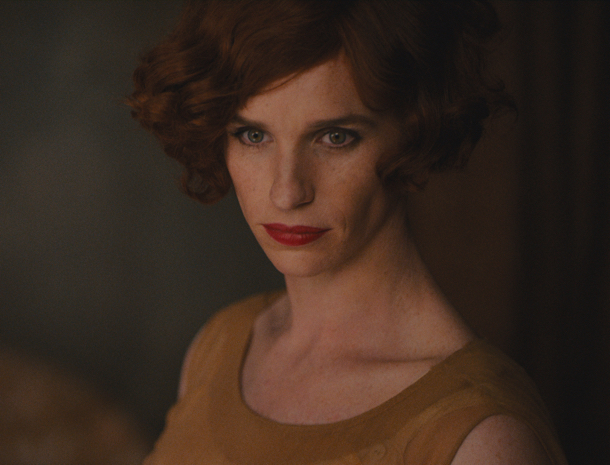 Tom Hooper (The King’s Speech) has filmed David Ebershoff’s novel of the same name about the life of the transgender pioneer and Danish landscape painter Lilli Elbe (aka Einar Wegener) with his usual over-emotive approach, which suits this ménage-à-trois of two highly-strung people much more than his portrait of King George V.

Gerda (Vikander) and Einar Wegener (Redmayne) are two painters enjoying their unconventional bohemian lifestyle in  early 1920s Copenhagen. Einar seems to be more successful than his wife; his impressionist landscapes are in demand unlike Gerda’s portraits, and the pair are desperate to start a family. This, and much else, will change when Gerda starts painting her husband in stockings, firstly as a willing model so she can finish a portrait and then, when he is turned on by wearing female clothing after attending a party. Whilst Gerda gains reputation, Einar sheds his identity only too willingly. He obviously has repressed his wish of becoming a woman, but now insists on being called Lilli by his wife, who although sexually happy to dominate, is nevertheless unhappy about losing her male husband. Visits to the medical profession end in disaster and finally, the couple settle in Paris, where Hans (Schoenaerts), a friend from Lilli’s schooldays in the provincial Vejle, is working as an art dealer. Hans, who had kissed Einar innocently as a boy (only to be chased away by the enraged father), is unable to help Lilli but falls in love with Gerda, who has to terms with her husband’s cross-dressing and is determined to help Lilli realise his dreams, such is her unconditional love for him. After meeting Dr. Warnekros (Koch), a doctor from Dresden, Lilli has an operation to remover her male genitals. After returning to Copenhagen with Gerda, she feels happy and relieved at finding becoming herself but this is not the end of the story.

Lilli Elbe’s diary formed the backbone of Eberhoff’s novel. Hooper and his scriptwriter Lucinda Coxon have focused very much on the strong emotional bond between Gerda and Lilli, which survived their conventional marriage. The rollercoaster, which their life had become after Lilli’s ‘rebirth’, would have unsettled any partner, let alone a woman, who had lost her spouse to another gender identity, and also the opportunity of becoming a mother. But Gerda shows her caring instincts when handling Lilli in her ‘perpetual crisis’. She might have become irate at times, but Lilli,’s happiness was always paramount for Gerda, and appreciated by Lilli. In a way, Gerda was the midwife, who delivered Lilli.

Redmayne gives another Oscar-worthy performance as Einar|Lillii transforming from a man to a woman in seemless and convincing style and Vikander is also to be praised for her strikingly feminine yet powerful turn as Gerda. Schoenaerts takes on another tricky role as a masculine man who is unable to really exert any influence over Gerda or Einar|Lilli, such is the strength of their completeness as a couple. Sadly he has very little scope in this secondary role.

Lilli was very much the pioneer who is surprised to find herself in the wrong body; after all, knowledge about transgender theories were not even found in psychoanalytical circles of the time. Lilli was always fighting for the next step, against an environment, which was not ready for any of this. Working as a shop assistant in Copenhagen, enjoying the company of her same-gendered colleges, was perhaps the highlight of her female life. The images of DOP Danny Cohen do the life story of two painters admirable justice with ravishingly painterly sets and glorious landscapes. Costume design is impeccable as is the Art Nouveau set design from Eve Stewart. Alexandre Desplat’s evocative score compliments this gorgeous period piece that explores the heartbreaking emotional adventure of a couple who overcame all biological borders, proving that sexuality can easily be a moveable feast, when mutual attraction and real love is present. AS

NOW ON GENERAL RELEASE | REVIEWED AT THE VENICE FILM FESTIVAL 2015