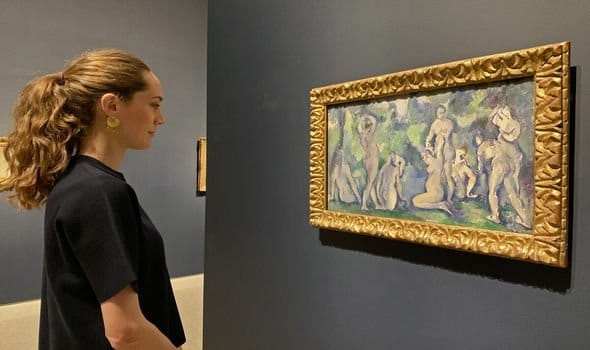 The Danish Collector: From Delacroix to Gauguin (2021)

A private collection of modern art including works from Delacroix, Monet and Gauguin forms the subject of this latest documentary from David Bickerstaff, best known for bringing international art exhibitions to the big screen.

The Danish Collector: From Delacroix to Gauguin shows how a self made man and his savvy wife saved a treasure trove of priceless paintings from the ravages of war in Europe by transferring them to neutral Denmark.

Wilhelm Peter Henning Hansen (1868-1934) rose from modest beginnings to amass a fortune from the insurance business. At the age of 25 he bought his first painting, Monet’s ‘Waterloo Bridge’ (1903) exploring changing light and fog in the haze of industrial development, and by 1912 Hansen’s French realist and impressionist collection was well under way as he set out to acquire twelve works from each of his chosen artists mapping the development of Impressionism from its origins and early influences of Ingres and Delacroix. These included paintings by Sisley, Pisarro, Monet, Corot, Corbet and Renoir and works by female Impressionist painters Berthe Morisot and Eva Gonzales.

When war broke out in 1914 he capitalised on the conflict by sending the paintings to his wife Henny in Denmark where they were housed in a specially designed country house in Ordrupsgaard (near Copenhagen). He later joined a consortium of middle-class Danish collectors whose aim was to bring outstanding French art to Scandinavia during in a wave of Civic pride.

Accompanied by an occasional score of strings and more romantic vibes, Bickerstaff’s agile camera lingers over the detail – particularly lovely is Manet’s 1882 ‘Basket of Pears’ – as well as giving a broad-brush approach to the works in their various settings, interweaving informative on-screen interviews from relevant curators.

Eschewing a straightforward narrative the style here is to gather together the various specialists and then give them free rein to talk about their own research and insights. This gives the doc a random, freewheeling yet highly informative quality as the curators go off on their different tangents.

After an intro from London’s Royal Academy chief Axel Ruger we swing into the gallery where Bickerstaff takes us on a fleeting tour of the exhibition, double hanging reflecting the way Hansen hung the pictures in his own home, whetting our appetite for what is to follow.

Anna Ferrari takes over telling us how Henny Hansen realised that the works acquired by her husband were becoming increasingly becoming valuable amongst collectors, and shipping them back to Denmark. The couple were particularly keen on Monet’s ‘garden’ period and Sisley’s landscapes paintings that mapped a journey down the Seine, with smoking chimneys charting the burgeoning industrial era, his ‘September Morning’ (1887) shows leaves tussling in the fresh breeze, with the sky dominating. The film travels from London to Paris, the cradle of the Belle Époque, with its experimental artist scene, and then on to Denmark where Ordupsgaard’s curator Anne Brigitte Fonsmark enlightens with a tour of the house and its specially designed Danish furniture complimented by flower arrangements gathered from the lavish gardens, and the recently added extension by the later Zaha Hadid.

Art historian Professor Frances Fowle makes the most impact with her amusing stories about the illustrious women Impressionist collectors namely the Welsh sisters Gwendoline and Margaret Davies who built up the country’s largest and most important series of French Impressionist and Post-Impressionist works in the 1920s and bequeathed it to the National Museum of Wales, and Kentucky philanthropist Berthe Palmer (and her husband Potter) whose collection now forms the core of the Art Institute of Chicago’s Impressionist collection. MT