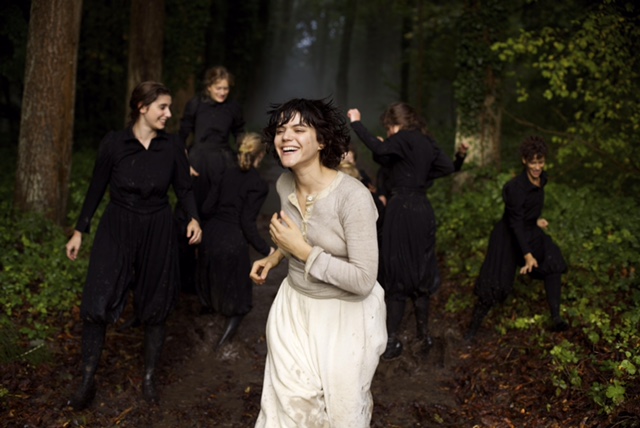 THE DANCER is the story of Belle Epoque dancer Loie Fuller (1892-1928) who rose to fame at the Folies Bergères and became the protégé and rival of the more famous Isadora Duncan. The debut feature of filmmaker writer Stephanie Di Giusto, the film plays in the Un Certain Regard side-bar of the Cannes this year, more for its distinctively auteurish look and feel (as the strand suggests) than for the rigour of its narrative or performances. Don’t expect to find out more about either of these famous women as the focus here is on atmosphere, visual allure (dreamily lensed by Irreversible and Enter the Void’s Benöit Debie) and turn of the century styling and costumes.

Told as a linear narrative, it stars composer Soko – in the central role of Marie-Louise Fuller, who we first meet during a rodeo where he father Ruben (Denis Menochet) is a professional rider who is killed off early on in the proceedings. Fuller’s artistic leanings are illustrated in her sketch pad drawings and secretly rehearsals of Salome. She has a mane of dark hair but is stocky and rather gauche until, that is, she sets sail for her mother’s home in the Temperance Hostel for Women in Brooklyn and auditions for a part in a play, where she uses her ill-fitting skirt to her advantage during a sartorial mishap and ends up inventing her stock in trade – a strange swirling dance requiring metres of fabirc (not unlike that of the Whirling Dervishes). Yes, this dance catches on when she turns up at the Folies Bergères for audition, and snaffles none other than soigné French aristocrat Louis Dorsay (Gaspard Ulliel) who appears to be looking for a strong and emotionally unavailable woman, having just divorced his wife. And Louis Dorsay is a gift horse of the highest order who not only allows Loie the run of his fabulous villa and estate to rehearse her own team of dancers, but also appears to fall deeply in love and dotes on her every whim, despite their obvious physical incompatibility.

When Isadora Duncan arrives from San Francisco, in the shape of the comely but ultimately bland Lily Rose Depp, whose dancing scenes are deftly edited to make it look as if she’s dancing – it’s actually a stand-in. Things take a momentary turn for the worse, as Duncan appears to adore Loie to her face, but behind the scenes emerges as a manipulative minx with a few tricks up her tutu. Although Soko manages an affecting performance in the final scenes, THE DANCER is enjoyable while it lasts, but ultimately as forgettable as candyfloss. MT