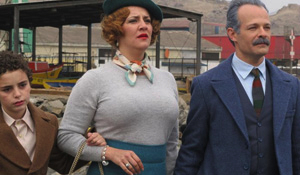 This is Alejandro Jodorowsky’s first film in 23 years and it seems that the Chilean director has lost none of his absurdist inventiveness. This paean to the past is largely autobiographical: The film takes its setting from the Chilean desert coastal town of Tocopilla, where Jodorowsky was born in 1929 and underwent an unhappy and alienated childhood as part of his uprooted family, faced with anti-Semitism. Casting his own son Brontis to play his Communist father, Jaime, he mixes magic realism, mythology and poetry to project his viewpoint that reality is very much an expression of our own personal experiences. And his were bizarre, to say the least. But the desire here appears to be one of conferring glory on his father for the greatness he never actually managed to attain. The story opens as a disused local cinema has opened its doors again to show an outlandish film. Unhappiness clearly has caused him to submerge or block out the pain of his childhood and create a flight – or a dance of fantasy, which is entertaining and provocative, but naturally creates a smokescreen from what actually (or possibly) happened.

Jeremias Herskowits plays the young Alejandro and the director himself steps into his own shoes as a white-haired old man (he is now in his eighties). Alejandro’s mother Sara (Pamela Flores) is a voluptuous, dominating matriarch, very much in the Jewish style, a woman of great feeling and who smoothers her son with love, inadvertently de-masculating him to the annoyance of father Jaime, who would like to toughen him up.  The emotionally confused Jaime finally leaves town on a misguided mission to assassinate the Chilean general Ibanez: a venture that will not bring triumph, but enlightenment.

The film is full of absurdist moments some hilarious and some just downright weird – although the products of a mixed up youth – but what a fascinating youth it – possibly – was; serving to bring to a close a era brimming with troubled thoughts, broken dreams, high hopes and magnificent imagination. MT