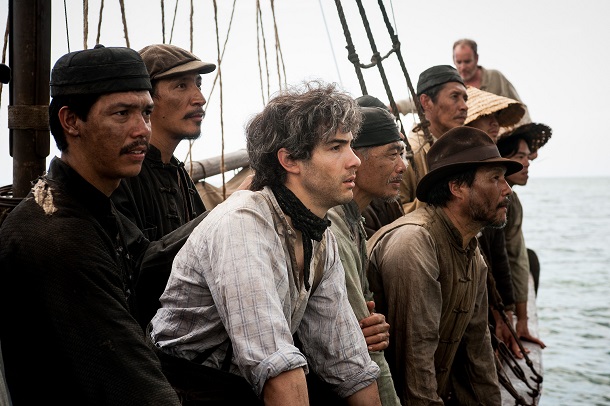 One of the hot picks for the Golden Lion at the Venice Film Festival, Turkish-German director Faith Akin’s Armenian genocide epic is sweeping, if rather anodyne affair, starring Tahar Rahim as a (primarily) mute father searching for his missing daughters.

Taken out of the running for Cannes by Akin for “personal reasons” might have proved an omen, but Akin is able to rely on an old-fashioned sensibility, which only disappoints because he’s been so irreverent elsewhere. His Berlin winner Head On and Edge of Heaven were exciting indie films that talked about culture clashes and integration in a very modern and sophisticated way, but in making a historical epic in such a conventional fashion, The Cut misses out what was previously so refreshing about his work.

The film begins in 1915 in the Anatolian city of Mardin, as Ottoman troops tear away Rahim’s Nazaret from his wife and daughters under the auspices of conscription. In fact, like other ethnic Armenians, he’s dragged to lay roads for the Ottoman forces in the First World War. The slave labour is all right for some, who believe it’s better than being on the battlefield, but those who survive the dehydration and exhaustion are later faced with death marches. Nazaret narrowly survives after a civilian executioner feigns his death, leaving instead a tear in his throat that makes him unable to talk. After spending the war in soap factory – a metaphor for ethnic cleansing if you needed one – he discovers that his daughters survived, and proceeds to cross the Atlantic in search, from Havana to the plains of North Dakota.

The 1915 atrocity which killed 1.5 million remains a hotly politicised issue, which makes Akin’s conventional exploration of the story all the more baffling. This is an event that Turkey denies took place, and even Britain, unlike, say, France and Germany, also refuses to call a genocide. Directing aside, there are strong overtones with crises in the region today: at one point Ottoman soldiers order Nazaret and his fellow Armenians to convert to Islam to be set free – only a few accept the offer.

Rahim has a shaggy charm in the role, although when he stops communicating through words, he doesn’t quite have the physicality as an actor to really excel in the part. It’s strange, since his excellent performance in A Prophet depended so much on the presence he brought to the role, something found wanting here. One of the film’s more moving moments has Nazaret stop to watch Charlie Chaplin in The Kid in a town square screening, and you can’t help but regrettably compare the two actors – Rahim is even made to look like Chaplin.

The dialogue in English is not so much stilted but terribly naff, and the decision to have Armenians speak English in the film proves problematic when the film reaches, well, America. But perhaps concentrating on dialogue is taking away something from the film. This is a film about images – like when Nazaret, desperate for water, looks down a well to find piles of dead bodies – and, indeed, about silence. Silence about how the world has reacted, shrugged, at the history of the Armenian genocide that was an example to the Nazis two decades later. In that way Akin is speaking about today: while Chaplin’s job was to take people away from the horrors of the First World War, Akin and Tahar Rahim’s silent tramp is doing the opposite about today’s conflicts in Syria and Iraq. Ed Frankl

VENICE INTERNATIONAL FILM FESTIVAL RUNS UNTIL 6 SEPTEMBER 2014. READ ALL OUR COVERAGE UNDER THE FESTIVALS BANNER.