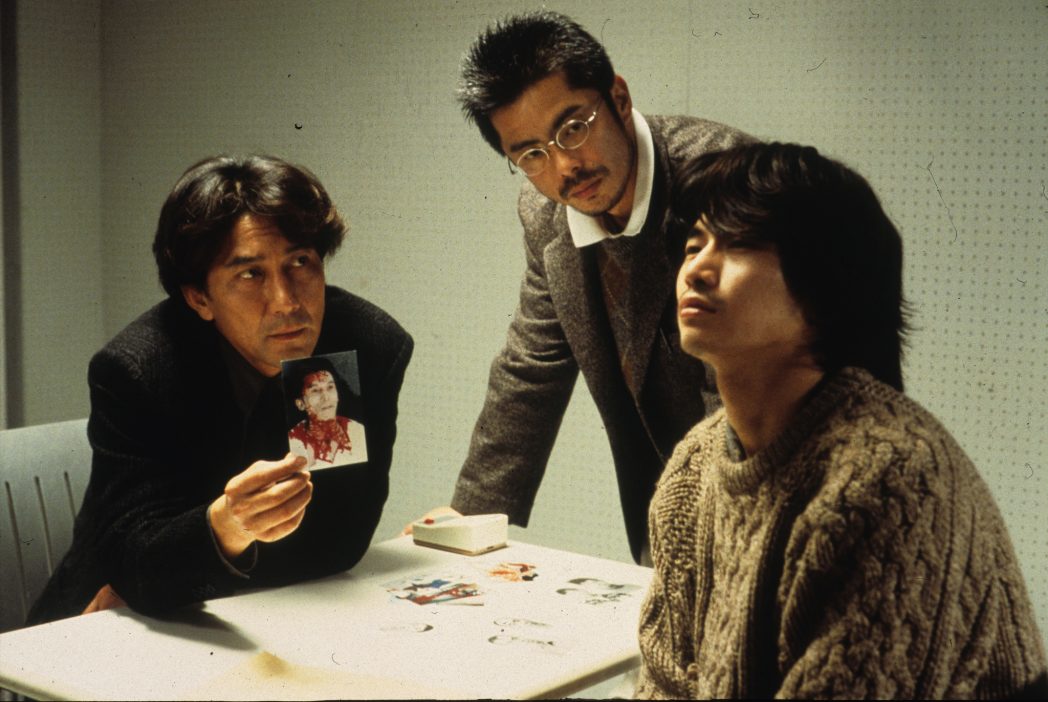 Twenty minutes into Cure (Kairos) I was reminded of David Fincher’s Seven, and the first Japanese Ring film, both causing me to think that they had influenced Kiyoshi Kurosawa. In fact Seven (1995) was 2 years before Cure: with Fincher’s urban decay corresponding with Cure’s grimy and rundown suburbs of Tokyo. However Cure was made 1 year before Ring and shares some of its long dark-hair menace (from both ‘villian’ characters) pulsating as strongly as their similar eerie soundtracks. A further link is the menacing way that spilt water is filmed, prefiguring Dark Water (2002) and reminding you of the malevolent power of water in old Japanese ghost stories.

Putting influences to one side, Cure is more of a hybrid than the other productions. Part psychological thriller, cop movie and supernatural horror film – blending all these generic elements with impressive skill. This is a film absent of sensationalist gore and full of creepy menace. There is no cure for anyone in this ironically titled drama. Quite the opposite. Characters are infected by a sinister hypnotism event, from 100 years back, causing people to be mentally manipulated to kill those they work or live with.

Kenichi Takabe (Koji Yakusho) is a Tokyo detective investigating a serious of gruesome murders – a large X is cut across the victim’s neck. The killers are caught and cannot explain what made them kill. Takabe accompanied by psychologist Sakuma (Tsuyoshi Ujiki) trace a connection with a young man called Mamiya (Masato Hagiwara). When brought in for questioning Mamiya appears to be an amnesiac – he’s very dazed and confused about who he is, where he is and what he’s doing. After searching his apartment the police discover that he used to be a psychology student who studied the ideas of the 19th century hypnotist Anton Mesmer. They conclude that Mamiya is capable of planting hypnotic suggestions in people that turns them into murderers.

The ex-student mesmerist, the stressed detective and his mentally unstable wife are pitted against a force which initially appears emphatic. Mamiya wants to know his victim’s emotional state. “Let’s talk about yourself” is a re-occurring request through Cure. Mamiya wishes to make “the inner become the outer” and have them act on their darkest impulses. The very matter of fact depiction of the killings in Cure is what makes for an unsettling experience. The scene where a policeman takes out his gun and kills his colleague, just outside the police station, is chilling for its casual horror. He carries on working then drags the body inside. Filmed at a distance, acutely well framed and morally detached: nothing unusual is seen to disturb the policeman’s banal routine.

There is little obvious thriller action in Cure. Many clashes of will and personality occur in a hospital or police headquarters: the best of these almost equalling the interrogations in Silence of the Lambs. Aided by excellent performances from Koji Yakusho and Masato Hagiwara, setting up their suspenseful games, Kurosawa powerfully creates a highly personal and atmospheric world of damaged individuals.

If you carefully examine the plot then you will find holes. Why would Anton Mesmer be such an influence – where’s the real proof? Why did the hospital nurse appear to tear off the face of the bloodied corpse in the waiting room? It’s never explained. How was the ‘curse’ of hypnotic suggestion actually passed on to new perpetrators over time? But this is the logic of a mysterious and highly intelligent horror film where emotion suppresses cold rationality. By not explaining too much Cure allows its creepiness to infiltrate the viewer. And like all good horror stories plants its dread of the unknown in a plausibly real and indifferent world.

Cure is so strong and gripping that it makes me eager to seek out Kurosawa’s other works, both horror movies and art house cinema. He is subtle, understated, visceral, very in control of his medium and ought to be better known. A remarkable filmmaker. ALAN PRICE ©2018