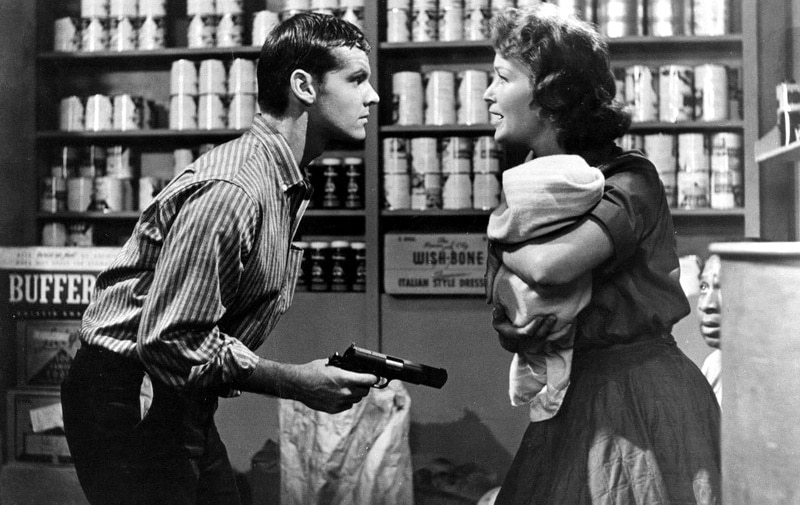 Jack Nicholson makes his screen debut in this economy-sized Le Jour se Lève’ for the Drive-Ins where he is second billed to veteran TV and ‘B’ movie tough guy Harry Lauter; here representing the law. Although Roger Corman is credited as Executive Producer, and has one line as a TV cameraman (after which all we see of him for the rest of the film is his right hand resting on the side of the camera), the film is a United Artists release rather than one of AIP’s quickies, with slightly bigger production values; a mixed blessing in the face of TV director Justus Addiss’s lethargic direction.

Corman regulars Leo Gordon (who co-wrote the script) and Bruno Ve Sota (who the same year directed The Brain Eaters) fill out the throng gathered to ogle; and Gordon generously gives Ve Sota one of the script’s best lines, “Teenagers, never had ’em when I was a kid!”

The basic situation dates back at least as far as Jean Gabin in Le Jour se Lève’ (1939), and was probably more immediately inspired by the siege at the end of Rebel Without a Cause. Nicholson doesn’t actually get that much screen time, as much of the action taking place back in the diner and in the forecourt. The script flits from character to character, including Gordon’s own wife Lynn Cartwright, who gives an attractive performance as waitress Julie, united with Ruth Swanson as Nicholson’s mother in her contempt for poison maiden Carolyn Mitchell who started all the trouble in the first place by ditching Nicholson for obnoxious alpha male bully Brett Halsey. (Swanson sums her up as “selfish, vulgar, cruel…rotten!!”)

The film’s unsung hero is Jordan Whitfield as Sam, the black dishwasher who keeps his head throughout the crisis. That we don’t see him get his due as Hero of the Hour at the film’s conclusion is one of several issues left unresolved (including the ultimate fates of both Nicholson and Halsey) when the end credits roll. @Richard Chatten