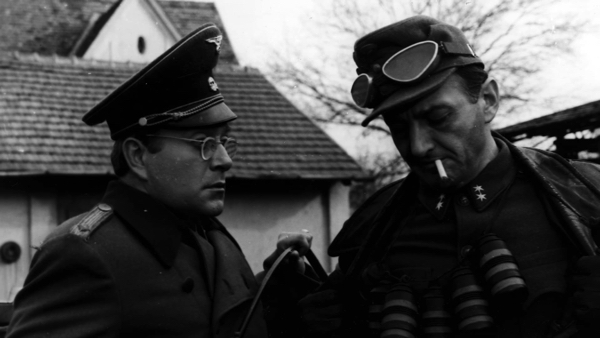 The Corporal and the Others is an anti-communist comedy and a satirical take on outside forces occupying Hungary during the Second World War. It was of course made during Soviet occupation so uses metaphor to escape the censors.

Although Hungary was technically on the same side at Germany, having relied on on the nation to pull it out of the Great Depression, The Corporal portrays the relationship as deeply farcical despite the soberness of its subject matter. And this deadpan humour is what makes it all so amusing, emphasised by the film’s upbeat score.

Imre Dobozi’s script was obviously going to make the film a crowd pleaser for Hungarian audiences, but Keleti’s direction is also laudable with some extraordinary set pieces featuring snow-swept battle scenes, and a sneering central performance from Imre Sinkovits ( Ferenc Smolnar) as the corporal himself. At the Hungarian Film Week, the most important film festival in its homeland, the film bagged him best actor and garnered critical acclaim sweeping the board in 1966. A great comedy then, but not a masterpiece. A metaphor for Hungary always being under occupation, each of the characters represents a cliche of sorts: Major is the distinguished Englishman, Sinkovits, the upstart an so on.

Marton Keleti is not well known outside his homeland unlike Bela Tarr; Istvan Szabo; Sandor Kovacs; Zoltan Fabri or Milos Jancso. On account of being Jewish, Keleti was actually banned from making films during the war years but he certainly addressed the balance with a decent output of fifty films, starting in 1937 with Viki, and taking up in the immediate aftermath to the war with A Tanitono (1945). Possibly his most notable achievement outside Hungary was his Palme d’Or hopeful Ket Vallomas (Two Wishes, 1957) which came home empty handed despite a wonderful central performance from Hungarian star of the time Mari Torocsik.

The Corporal and the Others sees the German Fascists plan their exit from Hungary at the end of the war (1944-45) only to be replaced by the Russians Soviet troops. In the ensuing mayhem, deserting Hungarian soldiers and are just trying to avoid being killed, including those from the special Fascist wing under Ferenc Szalasi.

Molnar is stuck in a deserted country house (which is still being run by the butler Albert (Tamas Major/Colonel Redl) having stolen the money to pay his fellow comrades in arms. But unbeknown to Molnar, other deserters are also in residence: Imre Gaspar (Laszlo Kozak) and Gyorgy Fekete (Gyula Szabo) to name but a few.

There is nothing heroic about any of these characters, in fact most are actually cowards, making things all the more hilarious, as heroism is the last thing on their minds, and they duck and dive like chameleons in company of their enemies, constantly changing uniforms to mask their real identity. And this was the crux of the comedy: Hungarians often joking about having to change uniforms to reflect its history of being occupied, first by the Turks, then by the Austrians, Germans and finally the Russian Communists who radar Keleti was keen to escape. MT