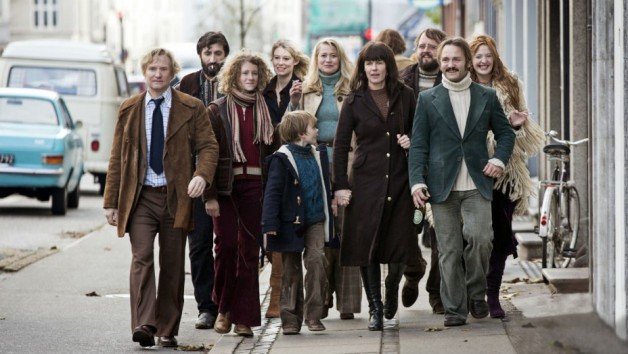 Growing up in a commune in Denmark, Thomas Vinterberg brings his experience to bear on this long-awaited but rather disappointing and occasionally vapid drama set in Seventies Copenhagen. Inspired by Vinterberg’s own childhood spent in a similar set up, he roundly dismisses the idea that commune living is the be all and end all but not in a way that’s altogether convincing, despite this collaboration with well-known and reliable scripter Tobias Lindholm. Refreshingly, he pitches his story from a middle-aged angle with the premise that commune living might be the answer to jaded marriages rather than offering unbridled sex for the twenty something brigade. But what emerges is quite surprising and often emotionally cruel: that said, it is a more cheerfully playful film than its more interesting bedfellows Ang Lee’s The Ice Storm and Lucas Moodysson’s Together.

Talk of communes immediately conjurs up the subject of drug-fuelled evenings by the camp fire but there are more provocative issues stoking the flames in this ’70s household that was once the exclusive family home of its altruistic owners, Ulrich Thomsen’s well-off middle-aged architect Erik and Trine Dyrholm’s newscaster Anna, whose marriage is ticking along  nicely but needs some tuning up as it approaches the final hurdle. And as women often are, Anna is the one to suggest that commune living might be the answer to spicing things up in the bedroom and elsewhere.

The idea here is that Erik and Anna will open their spacious home in an upmarket suburb of Copenhagen to friends and acquaintances with the hope of creating an interesting new dynamic in their domestic arrangements. Clearly extroverts – the pair of them – but even then, this facile idea predictably falls flat when, surprise surprise, blond bombshell Emma comes along in the shape of Helene Reingaard Neumann. To be fair, she emerges via Erik’s office as a young architect keen to cosy up to his superior design skills and a bit of extracurricular activity. Emma makes all the running initially but Erik is soon smitten and the two begin a torrid affair. Initially gobsmacked, Anna takes it all in the spirit of openmindedness but pretty soon cracks begins to appear in the facade of false bonhomie. The saying “Out of sight, out of mind” couldn’t be more apt here as things take a turn for the worst. Had Anna had a chance to tackle Erik from a position of strength and silence, all might have turned out reasonably; the affair burning itself out naturally due to living arrangements not being up to standard (he is an architect, remember). But having the affair played out in front of her in the confines of her family home – with Erik enjoying the marital bedroom and still having access to her whenever he needs, the dynamic takes a toxic turn for the worst.

The Commune is a watchable drama – even if, by the end, you’re watching it while grimacing or slowly dying inside. But there’s a trite glibness to the story that feels overly misogynist and mean. Characterisations are superficial and flimsy, with every part underwritten except for Anna’s. And here Dyrholm gives a moving and intensely knowing performance for which she won a Silver Bear. The Commune has the quality of a soap opera rather than a serious drama and there is nothing to tether it to the ’70s setting apart from its fashions and hairdos and the odd reference to Vietnam, making it feel insubstantial, immature and tonally bland in the competition line-up. One feels sorry for Anna, but Vinterberg keeps on turning the knife, almost as if he had a personal axe to grind with the cruelty unremitting until the bitter end – in a similar vein to his previous Berlinale 2012 outing The Hunt.

Vinterberg and cinematographer Jesper Toffner go back to Dogme days with their dizzying handheld cameras and the colour palette of pastels adds to the feeling of glibness: duck-egg blues and caramel creams. It’s all a bit beige and unchallenging but the undertone is rapier sharp and raw.MT