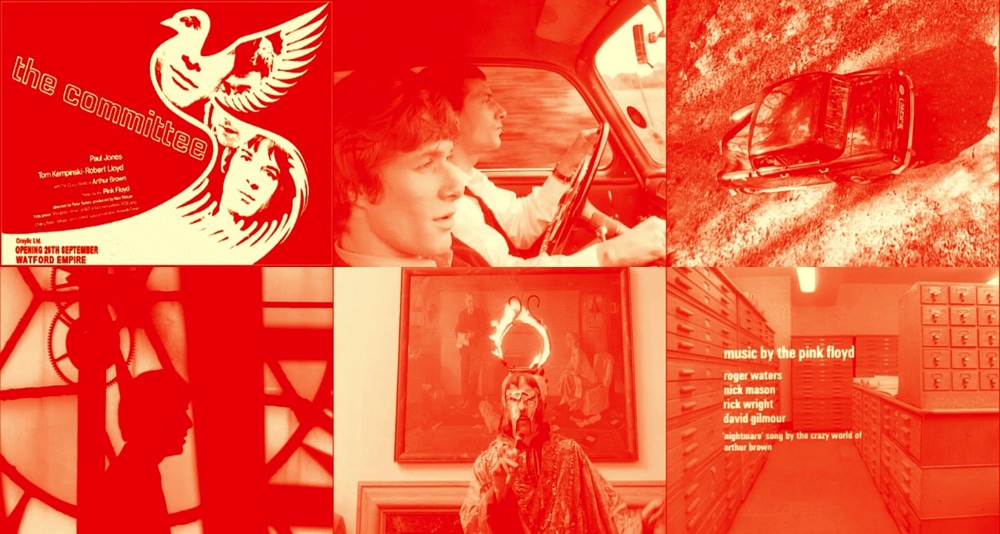 To grasp where this film is coming from I guess you’d have to read the short story by Max Steuer (originally a dream) on which it is based. It plays as a bargain basement melange of Robbe-Grillet and Kafka, with the attention immediately grabbed by the arresting title sequence juggling mug-shots of the three main protagonists to a sinister blurping accompaniment on the soundtrack; but which is soon allowed to dissipate by what follows. For a film that begins with the central figure decapitating a total stranger on a whim, The Committee is an incongruously well-mannered, very British affair – albeit with hip sixties trimmings in the form of a soundtrack by Pink Floyd and a personal appearance by Arthur Brown.

Ian Wilson’s cool black & white photography is presumably intended to evoke L’Année Dernière à Marienbad, and as in Marienbad there’s a lot of talk but very little actually said. The plush backdrop is here provided by the London School of Economics, where Steuer – author of ‘The Scientific Study of Society’ (2003) has been ensconced in the philosophy department since 1959, and was at the time of the making of ‘The Committee’ a lecturer in economics and social sciences. The endless gnomic prattle may be a joke at the expense of his colleagues there. @Richard Chatten

THE COMMITTEE is available on Amazon