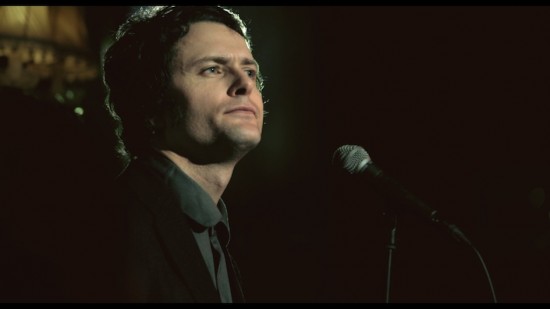 There’s nothing funny about The Comedian. A slice of realism developed by Tom Shkolnik: it has an improvised script and features a bland array of one twenty and thirty-something characters attempting to express their feelings, sadly coming across as inarticulate and one-dimensional.

Ben (Edward Hogg) is a confused messer: a person you really hope you’ll never meet, let alone become involved with emotionally or even as a friend.  Working in a call centre but wishing he could make it in stand-up comedy, he drifts around the fringes of his mixed-up sexuality with Nathan (Nathan Stewart-Jarrett), a genuinely pleasant young artist who adds a spark of authenticity to the proceedings. But when they start a relationship, with some tender and emotional sex scenes, Ben becomes evasive and starts to develop feelings for his flatmate Elisa (Elisa Laswoski), a musician, who then decides she’s needing time alone.

These characters are a drag and The Comedian is bogged down with poor visuals and a flabby narrative structure, despite well-crafted performances from the three leads.  At 70 minutes, it feels like a short that’s been extended into a full feature. It’s like a bad joke that has you desperately waiting for the punchline. MT