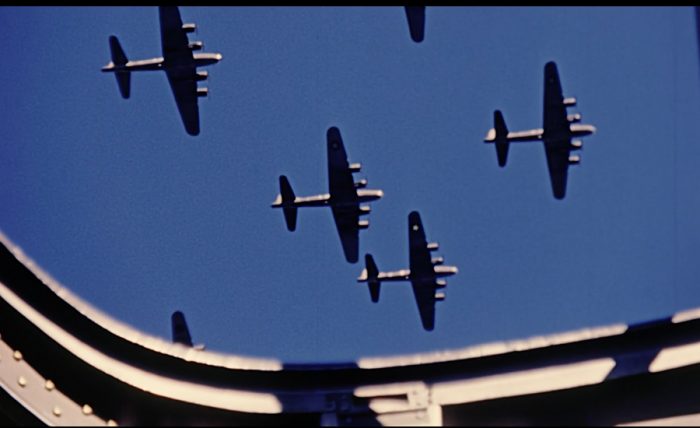 Erik Nelson has unearthed a treasure trove of recently discovered colour footage shot in 1943 by Hollywood director William Wyler for his WWII classic The Memphis Belle: A Story of a Flying Fortress (1944). The result is a quietly moving audio memoir of those surviving members of the Eighth Air Force who calmly talk us through their unique experiences transporting us back to the final years of the war. Set to Richard Thompson’s tuneful musical score the 16mm footage has the added advantage of being in colour, making it all the more extraordinary in its immediacy. Wyler risked life and limb to make his documentary, flying on more than 25 B-17 bombing missions during 1943, and one of the cameramen, Harold J. Tannenbaum, was actually shot down and killed over France. Surviving veterans take us back to the trauma with a calm dignity and pride. Clearly this was a daunting experience but they share their sense of excitement, even 75 years later. Many of them died serving their country, and in the Eighth Air Force the fatalities were particularly heavy, one man is driven to tears as he remembers losing a friend. Another recalls the mixed blessing of real eggs for breakfast -rather than the powdered variety. This usually meant they were in for a particularly perilous mission. But they never regretted killing the enemy, as one remembers “Never gave it a thought, they were just Germans….They’re gonna do it to us, we’re better off doing it to them first”. Fascinating stuff!. MT

ON RELEASE AT SELECTED ARTHOUSE CINEMAS on 4 July 2019