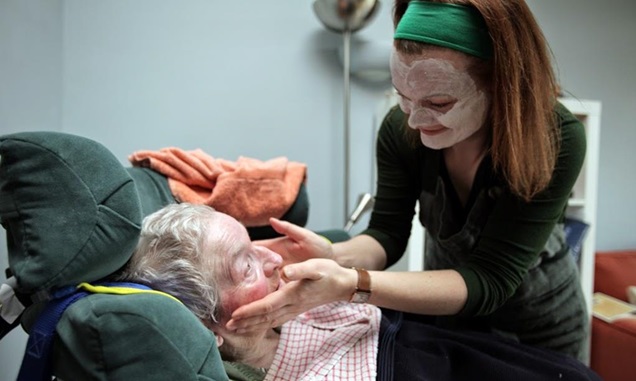 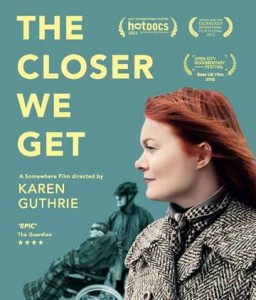 Karen Guthrie and her mother Ann had decided to make a film together, but Ann’s near fatal stroke brings her daughter back to Scotland in this moving tale of female resilience and male self-centredness, told from Karen’s uncomplaining, non-judgemental viewpoint. From the opening scene of Karen driving back through the night THE CLOSER WE GET has a compelling quality and a gentle lyrical feel to it. Narrated in her soft Scottish burr with a soft guitar score in the background, it is lushly shot by regular collaborator Nina Pope in warm summery tones, her Glasgow family home making an appealingly pleasant domestic setting for a bittersweet saga.

Riffling through the family snaps – both black and white – Karen brings us up to speed on her childhood – her parents, Ian and Ann had met in the early sixties – a sweet and sociable story of Glasgow family life in; aspirational and happy or so it seemed at the time. It emerges that both daughter and father nurtured an adventurous steak that led them to dream of better things and a more adventurous existence. But tight-lipped father Ian takes this a stage further when he suddenly ups and goes to Ethiopia to following his ‘passion for cycling’. On a mountain, there is a single shot of Ian, the only one during his ten years away in Africa. Her parents continue to meet for an exotic holiday once a year – until Ian moves back in again, ten years later and without comment to continue with his former life. But his behaviour has had a seismic yet unspoken affect on family dynamics. And Ann senses that all is not well, although she keeps this to herself until after Karen’s graduation. The repercussions of Ian’s behaviour are far-reaching over the following years, and when Ann suffers a stroke, Karen becomes a long-term carer for her delightfully endearing mum. Surprise and heartache awaits them both again, around the corner, but for now they’re all back together as a family – this time Karen is the mother and while Dad is expressing his dissatisfaction for his childrens’ under-achievements, as she patiently administers his glaucoma eye-drops.

With its shifts in tone and cinematography reflecting the dark more disturbing episodes, THE CLOSER WE GET is an honest, amusing and heartfelt testament to unexpressed feelings and resentments that brew under the surface of family dysfunction when a man’s infidelity results in fractured hopes and dreams for everyone else. Karen sensitively evokes these myriad emotions, as a family wound that gradually heals on the surface but continues to feel raw and sensitive beneath. And as she cares for her parents she gradually gets to know them as real people. “The closer we get, the less we can hide from each other”. MT