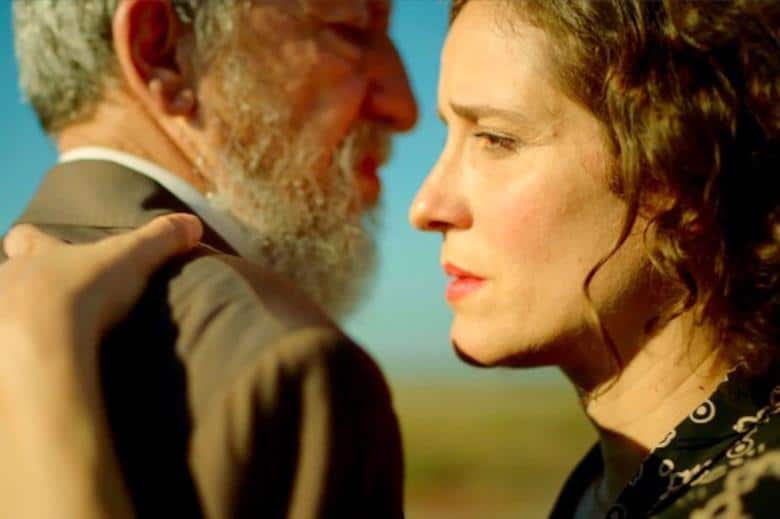 Actor and director Christos Passalis (Dogtooth) and Syllas Tzoumerkas (A Blast) get behind the camera for this incendiary expose revealing in six scenarios how Greece was complicit in the genocide of thousands of Jews from the city of Thessaloniki during the German occupation of the Second World War.

Even during the war the repression of Greek Jews was not a new thing: it started in 1927 with the foundation of the “Nationalist Union of Greeks” (EEE) and their newspapers that set out to fight the Jewish community for the low paid jobs. “Separate Jews from the Natives” was one of their slogans. “The Jew must go” – this one became reality under German rule; teaching the Jews a lesson was the edict of the times: “Jews must learn to do things with their hands other than counting money”. And “The time has come, for the yellow star people to pack their bags and go”.

Jews were lined up and put into the Baron Hirsch ghetto, whence they were deported to the death camps. Early in 1943 Sarina writes an imploring letter to her son Maurice, who has taken refuge with relatives in Athens. Concerned for his wellbeing she says: “Dear Maurice, we are all confined in the ghetto. This all seems to be the work of an experienced sadist. What we fear most are the deportations. Some trains have already left. On the day of the deportation, people burn money, documents and furniture. They abandon their whole life.”

Epanomi, 29 km from Thessaloniki, serves as a transit camp for the city’s Jews. Some are executed, others sent to German camps and a few are released after ten days. In an interlude, we watch the burial of Sarah, Sarina’s home help, who was treated like a daughter. Nina (Papandreou) is told to stop her brother chanting. Normality is soon replaced by reality. The 500-year old Jewish cemetery of the city, housing half a million tombs, is demolished by the Germans with the help of the local Christians during the second year of occupation. The broken marbles of the graves are used for the re-construction of several buildings, among them the St. Demeter cathedral. The bones of the dead are ground into sand for construction sites. In 1950, after litigation, the administration of the State of Greece builds on the top of the ruins of the Jewish cemetery the new part of the Aristotle University. In 2014 the government installs a memorial stone at the University campus.

Only 4% percent of the Jewish population will survive. Nina’s (Papandreou) report from the Hirsch ghetto: “Arriving at the Hirsch Ghetto, we are pushed into a room with German soldiers. They lifted our skirts, stripped us naked and used their fingers to probe our privates for hidden jewellery. This included my ten-year old sister. When they found nothing, they started slapping my mother. Hasson, one of the Orologas brothers, cut her hair with a pen knife, injuring her scalp. The son of our local butcher got so angry he tried to kill Hasson, but he failed and was shot on the spot. My mother was put into a cell under ground, we never saw her again. Our Rabbi, 70-year old, had to clean the ghetto with a broom for a whole day.”

After liberation, Hasson was executed, but the bigger names survived. In 1957, Max Merten, the butcher of Thessaloniki, visited Greece and was arrested. After eight months he was let go, the West German government had offered a loan. SS Captain Dr. Alois Brunner, Eichmann’s ‘right hand’ died peacefully in 2010 as consultant to Syria’s Hafez el-Assad.

After a dreamlike meeting between Nina and Mauricein the old city, we learn that the city’s brothels had been destroyed after the war. Some of the business was done in the old railway station of Stravrapouli, where  the Pavlos Mecas camp had been.

The last part is a surrealistic collage that sees one of the surviving members of the family trying to get government compensation, meanwhile, on the beach, the last peaceful years of Sarina’s family play out with a competition to find the ‘most moronic’ winner of a fancy dress event.

Reality bites again: In 1943, after the deportations ended, thousands of Jewish businesses were again sequestered, snapped up by local entrepreneurs and state institutions. After the war, hundred sought the return of their property. Not even half of them were successful, the main reasons for denial were “Abandonment by the former owners” and “the lack of death certificates for the victims in the death camps”.

Cinematically brilliant and thematically relevant The City and The City once again proves that the Holocaust was not an isolated event. Before, during and after WWII Jews were the victims of state-organised pogroms, supported by a majority of the population who they thought were their neighbours and friends. AS