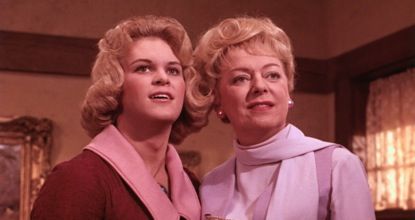 Described by David Thomson as “possibly the most bizarre departure by any director once in steady work”. The Christine Jorgensen Story that explores identity confusion, is virtually a remake by Irving Rapper, the veteran gay director of Hollywood ‘women’s pictures’- then in his seventies – of his 1942 classic Now, Voyager.  Yet Bette Davis looked far more butch in her Warner Bros. prime than John Hansen ever does here.

Rapper was doubtless equipped to empathise with what was troubling his confused young ‘heroine’, and it shows in the film; although the Danish ‘heroine’s transformation is here brought about by surgery, rather than psychoanalysis and a makeover by Perc Westmore and Orry-Kelly.

Based on Jorgensen’s autobiography the film feels like a TV movie of the period, complete with a 50’s-style piano & violin score by the veteran team of Paul Sawtell & Bert Shefter, but with the addition of words like ‘clitoris’ and ‘testicles’ to the script, and a glimpse of a penis in a shower-room sequence (was this a Hollywood first?). With women today clamouring to be taken seriously as footballers and for basic training for the armed forces, young George’s dislike for these activities and preference for wearing dresses would not necessarily today be seen as evidence that he’s ‘really’ a woman. The discovery by Professor Estabrook (Will Kuluva) that George’s glands are secreting more oestrogen than testosterone curiously leads him to recommend cutting them off altogether rather than simply injecting him with testosterone. So off to Denmark it is, where the operation he is about to undergo is described in quite some detail by Dr.Dahlman (Oscar Beregi).

We finally meet Christine about two-thirds into the film, when Hansen is transformed into a better-looking version of John Lithgow in The World According to Garp rather than the elegant and articulate woman Jorgensen actually became. That his father is discovered to be waiting for ‘her’ at the airport upon her arrival back in America provides a genuinely touching conclusion. Jorgensen declared herself satisfied with the result; as well as relieved that it didn’t end up as another ‘Myra Breckinridge’ @Richard Chatten