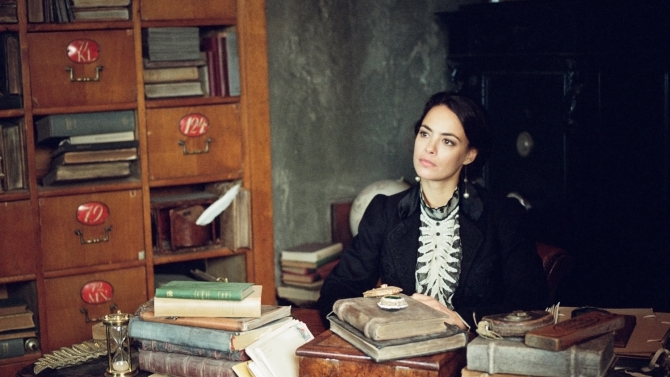 First time director Brady Corbet tries to engage with Jean-Paul Sartre’s L’enfance d’ un Chef (1938), crucially leaving out one of the main themes of the book – anti-Semitism – to end up with a caricature; in the process transforming the future petit-bourgeois ‘leader’ of Sartre’s work into a laughable, monstrous dictator by the ending.

Set in a French village after the end of WWI, little Prescot (Sweet) the son of an American diplomat (Cunningham) helping President Wilson with the Peace treaty and a German born, religiously devout Catholic(Bejo), is prone to histrionics and dark tantrums. Since both his parents are control freaks who take an emotionally distant interest in the boy (quite normal for the era) this is not particularly surprising. After his mother dismisses Mona (Moreau) the only person of any warmth in Prescot’s life, on the grounds of her disobeying orders, the wilful boy decides to stay in his room, rejecting figures of authority. The mother also sacks Ada (Martin), the boy’s French teacher. Finally, the father chases beat him brutally when he refuses him entry to his boudoir – where he literally is, as the word suggests, sulking. Childhood of a Leader ends as a farce, with the grown-up Prescot morphing into a ludicrously overbearing ruler.

Corbet’s debut is a muddled affair that attempts to keep us in the dark throughout: the tone is sinister and often terrifying, heightened by a ominous and melodramatic orchestral score. Does Presot’s father have an affair with Ada? Has the mother (an effectively coquettishly petulant Bejo)  has the mother slept with family friend (Pattinson)  mother f who comes for sporadic visits? Prescot seems to look more like him than his putative father. It’s uncertain. And finally, what is the reason for the mother getting rid of everyone who comes into daily contact with her son without replacing them?. The acting – apart from young Tom Sweet – is contrived and rather wooden, DoP’s Lou Crawley’s images are muddy and pseudo-naturalistic – pseudo being the operative word which characterises the whole production: bereft of any insight into psychological or political structures, this is a superficial travesty of Sartre’s novella. Quite why it was awarded the LEONE D’ORO for Best Debut is also unclear. Corbet has a future, let’s hope it’s a more promising one than that of his protagonist little Prescot. AS