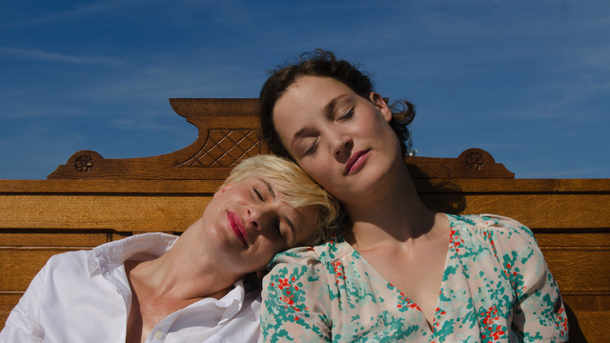 The end of her relationship with her rather dull manager and boyfriend (Steffen Muenster) at a the chinzy hotel where they both work, has exposed an obsessive compulsive streak in her fastidious behaviour as a cleaner and chambermaid which she clearly enjoys. The dull work routine and listening to French classic movies on her computer soothes Lynn’s anxiety and a certain amount of stress from her prying elderly mother who lives far away in a another humdrum existence. Cheerful in a vacuous way, Lynn offers her ex sexual favours – which he continues to accept – and even though the relationship is over she appears neither disappointed nor turn-on by this on-sided sexual routine. There are echoes of Amelie in both the tone and characterisation of The Chambermaid,  rather facile approach which belies some serious and even creepy psychological undertones.

Occasionally Lynn has taken to trying on guests clothing, riffling through their cubboards and sliding under their hotel beds in anticipation of what might happen when they return to the room. An expected S&M routine experienced under one particular bed brings her into contact with a masculine-faced dominatrix Chiara (Lena Lauzemis) who Lynn decides to try out on her own terms, with surprising consequences – although she doesn’t quite fit into the submissive character, Lynn clearly enjoys being controlled and punished in bed and Chiara brings this out into the open in several paid encounters which are professional and therapeutic for Lynn’s wellbeing.

The Chambermaid was shot by French cinematographer Sophie Maintigneux, who cut her teeth on Eric Rohmer’s classic Le Rayon Vert. Coupled with an atmospheric score from Jakob Ilja, The Chambermaid is watchable but lightweight in comparison to recent more fully-fledged LGBT titles such as The Duke of Burgundy and Blue is the Warmest Colour, although its delicate psychology is perfectly fleshed out by Krieps’ subtle performance. MT