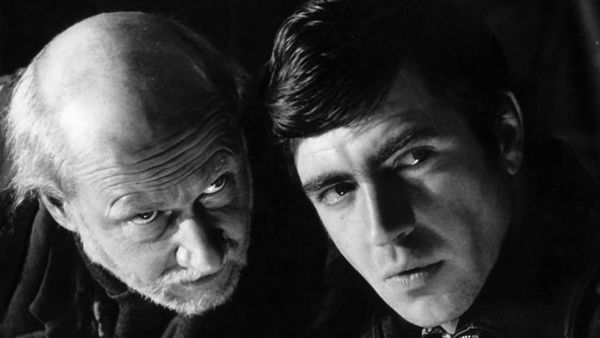 A play that changed the face of modern theatre and made Harold Pinter’s name, The Caretaker remains one of Pinter’s most famous works. Featuring original production cast members Donald Pleasence and Alan Bates, the film adaptation is sensitively directed by Clive Donner (Rogue Male) and was shot by Nicolas Roeg. It will be released by the BFI in a Dual Format Edition on 15 April 2019, presented with a variety of extras, and on iTunes on 29 April.

The Caretaker was also an early version of celebrity crowdfunding, with Elisabeth Taylor, Richard Burton and Noel Coward among the co-producers. With clear echoes of Joseph Losey’s The Servant from the same year (Pinter also scripted, based on a novel by Robin Maugham), The Caretaker is a power play as well as a psychological menage-a-trois. But whilst the titular servant in the Loosey film wins the battle with his master and his fiancée, the title character in The Caretaker looses out against the alliance of two brothers.

Hobo Mac Davies aka Bernhard Jenkins (Pleasence) is picked up from the street by Aston (Shaw), who takes pity on him on a frosty night, and invites him into the dilapidated home he , shares with his brother Mick (Bates). But having set foot in his bedsitter room, which has been used as a dumping ground for broken domestic appliances, Davies turns out to be opportunistic and aggressive at the same time: bullying the hyper-sensitive Aston, who has been the victim of electro-shock treatment during his teenage years. Davies also spins him a porkie about having to get to  Sidcup, to retrieve his ‘papers’ – a bogus excuse which provides a rich vein of humour. Despite being a tramp with no possessions or any way of financing him life, he has a high opinion of himself, and is extremely demanding and choosy finding fault in Aston’s generous attempts to accommodate him: particularly with regards to footwear. Alan Bates plays Aston’s cocky older brother Mick (Bates), who dreams about tuning the ramshackle house into a luxury penthouse – whilst Aston had mentioned a much more realistic project to Davis: the building of a shed in the garden, where Aston could use as a workshop. But Davis soon enthrals Aston with his stories of follies de grandeur – and the need to get to Sidcup to fetch his ‘references’. Private Eye’s column ‘Great Bores of Today’ could have been based on Pinter’s hilarious road references.

Even though, Mick throws a few coins at Davies feet, which the in the room is a small Buddha statue, which Aston cherishes. Trying to get to grips with Davies, Mick smashes the stature, whilst the former tries to get Aston to give him control over the household, relegating his brother. A knife suddenly turns up, but slowly the brothers form an alliance against Davies. Aston throws him out of the house, but even though Mick picks him up in the morning, after a Davies is shivering from the cold, Aston turns his back literally on Davies, who has returned to the house: Aston keeps out the light blocking from the window and condemns Davis to the darkness he came from.

Richard Donner (Here we go around the Mulberry Bush) directs the sparse action with great sensitivity, but DoP Nicolas Roeg steals the show, using all tricks in the trade to conjure up always new light and shadow games, in which the three protagonists are caught like in a spider’s web. Pleasance is really creepy as the ever-changing Davis, and Bates acts out his his psychotic tendencies with menace. But Robert Shaw makes the strongest impression, as the permanently tortured victim of intrusive medical treatment, which has robbed him of any idenity. AS