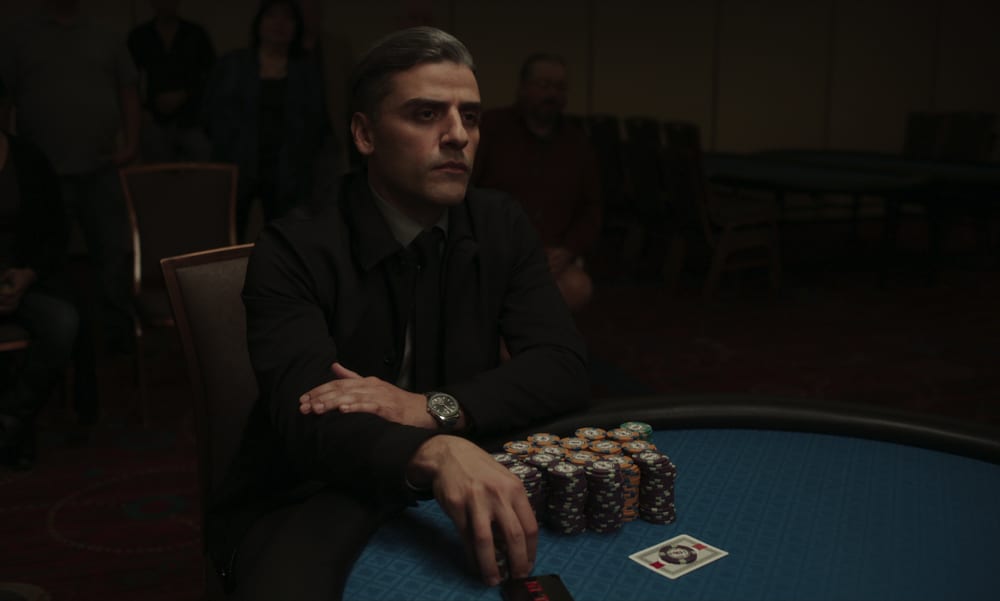 Paul Schrder’s latest thriller turns on a ‘one more trick before retiring’  premise. Oscar Isaacs is in his element as William Tullich, an ex convict from Guantanamo bay whose decade in prison has made him an introverted, compulsive routine-junkie now earning his living as a card counter travelling around from casino to casino ‘just to pass the time’ attracted by his skill at gambling rather than his desire for filthy lucre.

A bitier more full-blooded take on Croupier (1998), this is essentially a revenge road movie with a difference that contemplates a stale and soulless America fuelled by rancid day-old filter coffee, and reflecting on the bitter vestiges of Abu Ghraib prison where William served as a US officer complicit in the torture of inmates.

With his poker face and detached demeanour Will is driven by a subtle desire for redemption that gradually becomes more obsessive as the narrative strands mesh together revealing the true horror of how ordinary people can become monsters in a controlling environment where they are forced to create an alter ego to survive.

On the road William meets Tye Sheridan’s broken young man Cirk, a metaphor for a millennial caught up in debt and dysfunctional family relationships, whose father was also involved at Guantanamo. Will’s desire to help “the kid” will lead to a coruscating showdown in the film’s elliptical finale where Will comes face to face with his former army superior Gordon Gaddo (Dafoe). A subplot involving Will’s gambling sidekick La Linda (Haddish) is only the weak link here and doesn’t quite convince as the love story at the film’s core: neither Haddish nor Isaacs really connecting with the deep humanity of their characters as fully rounded individuals capable of expressing deep emotion. That aside this is a visually alluring and at times gripping thriller that imagines 21st century America as a lost and shallow shadow of its past. MT