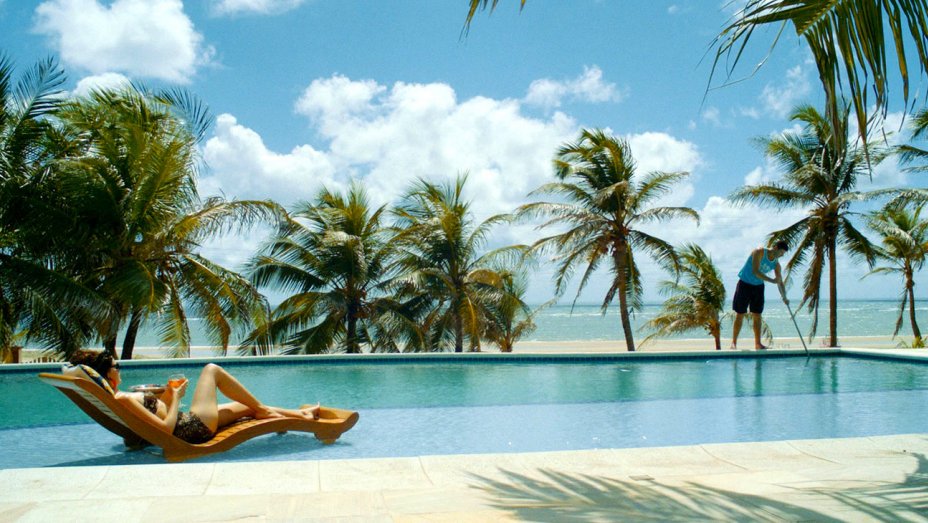 Satire is a dish best served with a slice of human flesh in this brilliantly dark, baroquely stylish Brazilian thriller from award-winning filmmaker Guto Parente, who co-directed My Own Private Hell.

Ana Luiza Rios and Tavinho Teixeira play a wealthy couple in Forteleza who get more than they bargained for due to their carnivorous conniving. In this poor and crime-ridden corner of Brazil, the idle rich live a glorious lifestyle: the sun shines, their private villas are post-modernist and beach-fronted, and there’s more than enough obliging staff to cater to their fantasies, which invariably involve a ménage à trois with a good-looking servant who is then served up for dinner with a glass – or two – of Brazilian Syrah.

Teixeira’s Octavio is particularly unappealing, an arrogant creep who finally gets his just deserts in the florid finale. Parente’s confidently vulgar narrative is so shamelessly bold it verges on the ridiculous. But The Cannibal Club makes for compulsive viewing punctuated by Fernando Catatau’s tango-style score and the lush backdrop of Fortaleza  Social connections are paramount, desires of the flesh are an hourly preoccupation. Orifices and appetites are voracious and must be filled and satisfied in an elegantly brutal way. And the razor sharp editing of some scenes is particularly masterful thanks to Luiz and Ricardo Pretti who contribute to this success of this slick, succinct and satisfying psychodrama. MT