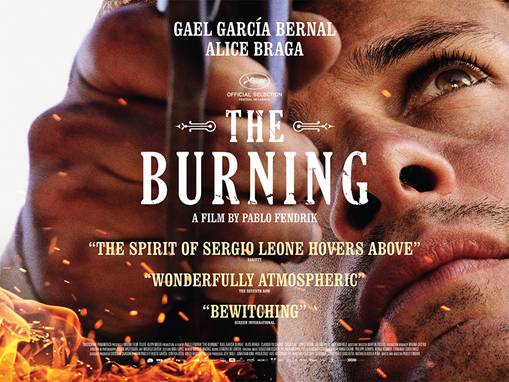 An on-screen text informs the audience at the start, that the people of the rainforest invoke beings from the river when they are threatened. Enter Kai (Bernal), whose name is never mentioned, emerging from the river with an strange tattoo on his shoulders. By introducing this enigmatic character, writer/director Pablo Fendrik (La Sangra Brota) sets in motion a story of greed and revenge, told in equal parts as magic-realism and Italo-western.

Three brothers, lead by the near psychotic Tarquino (Tolcachir), work for a company burning down the forest and replacing it with more lucrative pine and soy plantations. Murdering the farmers who do not give up their land – or, in the case of Joao (Diaz), even when they sell their land for nothing under threat, is their modus operandi. Joao’ daughter Vania (Braga) witnesses the murder and is abducted by the trio – another woman before her, hanged her herself in the forest to get away from her torturers). A friend of the family, trying to defend her, is shot, whilst Kai is in hiding. But he soon springs into action, saving Vania from a brutal rape and running off with her into the jungle. After making love, they are saved by a tiger, which gobbles up one of the brothers on the verge of shooting the sleeping pair. It becomes evident that Kai is somewhat of a pacifist and his reluctance to kill hinders his progress. In the meantime the brothers gather another six mercenaries to attack the farm where Kai, Vania and a friend (who once worked for Tarquino) are waiting. In a grand finale Kai will have to overcome his aversion to kill, if he wants to succeed.

THE BURNING  is a confusing film that never clarifies whether its main protagonist Kai is a magical being, or just a warrior who is in harmony with nature and the tiger, whom he joins in the forest at the end. And whilst the images of DOP Julian Apezteguia, the real stars of the film, blend in with the magic realism represented by Kai and Vania and their often silent intensity. The ending is just another shoot-out, even though very masterly staged. One wonders if Fendrik would have not done better had he maintained the total ambiguity of the Kai character to the end, instead of making him the master-schemer and executor of a sophisticated action climax. The languid middle part of THE BURNING, which comes nearest to establishing the unity of Kai/Vania with the forest and its creatures, is in this way somehow eradicated in an old fashioned action spectacle. AS