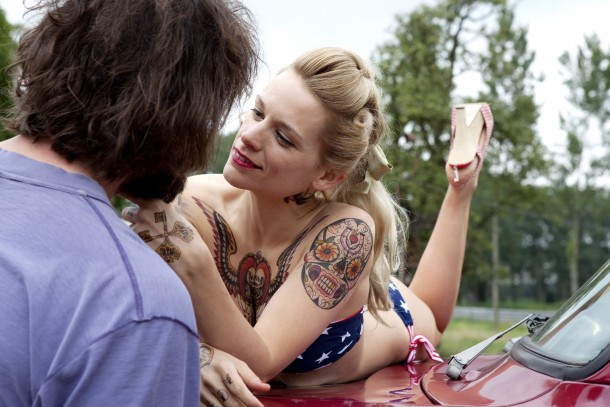 The Broken Circle Breakdown is a musical love story.  Inspired by Johan Heldenbergh (one of the stars of “The Misfortunates”) and Mieke Dobbels, it’s cleverly brought to life by Van Groeningen in fractured narrative form, captured on the widescreen in the lush, bucolic countryside around Bruges, Belgium.

Didier (Heldenbergh), a singer and musician and his partner Elise (Veerle Baetens), a tattooist  discover during a hospital visit in Ghent that their 6-year-old daughter, Maybelle (Nell Cattrysse), has leukaemia. 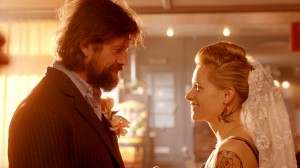 Flashing back to the moment they first met, the chemistry is ardent and their affair takes off as they instantly bond through music. Life takes its natural course, as the narrative dances back and forwards dipping into their lives in a way that feels natural and easy to follow.  They move into Didier’s restored barn and create a life together. There’s a vibrant energy to Moving Circle that echoes that of Cafe de Flore (2011). Heldenbergh and Baetens attraction feels real in moments of elation and sadness and they give passionate performances especially between the sheets, and when they perform with the Didier’s local ‘Blue-grass’ Band.

As the narrative develops, the storytelling becomes more erratic and a sudden shot of Elise in a ambulance fighting for her life, feels abrupt and disorientating, as if we’ve missed a vital clue.  What follows is heartbreaking and the tone becomes increasingly sinister switching from melodrama to something darker and more muffled.  Didier becomes unbalanced, ranting at the television in an unmoving outburst that attempts unsuccessfully to add a political dimension to proceedings. His touching sensitivity, previously anchored by Elise’s practical nature, transforms into the realms of psychosis and she also starts to lose the plot in a personality change that lacks believability as Broken Circle finally goes into meltdown in a dispiriting denoument to a promising start.  MT

ON GENERAL RELEASE FROM 18TH OCTOBER 2013