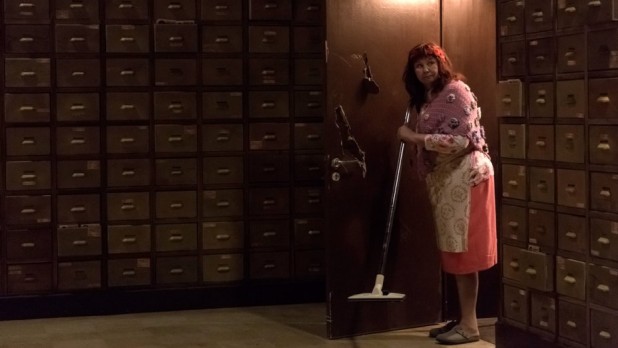 Belgian cult director Jaco Van Dormael’s absurdist imagined dramady reinvents God as ‘Mr Angry from Brusssels’; a miserable bully who focuses his frustrations on his family and humanity. And while his little daughter (Ea) tries to save the world, his doltish wife quietly embroiders in the background occasionally dusting down a statue their only son JC.

THE BRAND NEW TESTAMENT buzzes with inventive energy; every scene is stuffed with surrealism: giraffes roam the empty streets of Brussels while birds flutter in formation and Ea (a charming debut turn for Pili Groyne) walks on the waters of the Zenne river ). In this crazy cornucopia of cinematic delights, pop-philosopher Van Dormael also irreverently restyles the New Testament: the Almighty wreaks havoc on the natural world, crashing planes and setting fire to all and sundry, and mischievously casts Catherine Deneuve as one of 18 Apostles who leaves her husband for a gorilla.

To teach her abusive father a lesson, Ea secretly breaks into his private office to hack his computer, sending a catastrophic series of “DeathLeaks” where everyone receives a text detailing the precise time of their demise. This game-changer unleashes havoc on the human race, allowing Van Dormael to tackle themes of fate and free will in a contempo take on Chaucer’s “Knight’s Tale”. Taking things further, God (the father) realises that he no longer calls the shots, causing Ea to leave home to find support from a local tramp who helps her recruit six new Apostles. These are all characters who are afflicted in some way, and it is here that Van Dormael’s wackiness descends into tedious torpor – as none of them actually adds much to the gospel narrative. The first is Aurelie (Laura Verlinden) a sad soul who has lost her arm; Killer (François Damiens) so named for his sociopathic tendencies; Deneuve as a bored and neglected wife – who finds contentment with her Gorilla and finally Willy, a sparky little boy with a life-limiting illness, whose last wish is to become a girl. God’s wife (Yolande Moreau) saves the day in the final act where she adds homespun joy to the world with some delightful imagery from cinematographer Christophe Beaucarne. The message here is possibly that women just want a caring and peaceful life with someone to love them while men are the ultimate power seekers.

Is it funny? Not in a laugh out loud way; but there’s so much verve and energy here and a natural ease that makes THE NEW TESTAMENT visually entertaining and enjoyable if you gloss over the rather silly storyline. Poelvoorde and Groyne are on top form, carrying the caper through to its carefree climax with relish and aplomb. MT