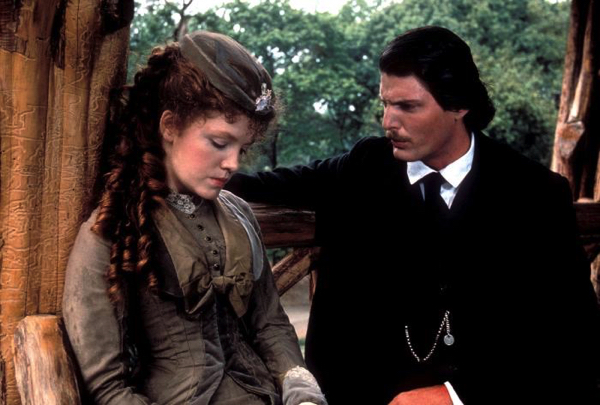 The Bostonians was James Ivory’s second Henry James adaptation, produced by Ismail Merchant with Ruth Prawer Jhabvala’s agile script. Five years after The Europeans – the drama shares some of the fault lines, but is content-wise more convincing, largely down to the quality of the novel: James had matured considerably in the seven years separating these two painterly features.

Post-Civil War Boston 1875: cousins Olive Chancellor (Redgrave) and Basil Ransome (Reeve) are in a duel for love and much more: the soul of young Verena Tarrant (Potter). Olive is wealthy and a staunch suffragette, penniless Basil Ransome hails from Mississippi (practising in New York) but likes his women “the way, that they should not think too much, not to feel any responsibility for the government of the world.” In short he is an out and out misogynist.

Both Olive and Basil track their prey on stage, where Verena gives a rousing speech about women’s rights. Ransome would love nothing more that to make her fall in love with him. Olive sees Verena as her student, coaching to be even more efficient on the soapbox. To this end, she sends a fat check to Verena’s father, the charlatan Dr. Tarrant (Addy), and sweeps her away. In the course of their relationship, Verena prospers even more than Olive could have anticipated. She also makes the young woman take an oath, promising never to marry. This is too much for Ransome to bear, he plays the romantic seducer (but is clearly on the spectrum), and the crying Verena succumbs to his proposal. “It is to be feared, that with this union, so far from brilliant, into which she was about to enter, these were not the last she was destined to shed.”

This is Vanessa Redgrave’s film, perfectly cast, she not only looks the part but exudes charm and perseverance: “her eyes had the glitter of green ice”. (Well, we all know they’re blue). Reeves, oscillating between lover and social climber, is much better than expected. Unfortunately, debutant Madeleine Potter’s Verena is disappointing, to say the least. The subtle complexity between Verena and Olive’s dynamic comes across as more obvious than in the novel. But they shrink from enlarging the subtext to a point where it would become manifest. The script tries to flesh out the supporting characters but they remain cyphers: Jessica Tandy’s libertarian Miss Birdseye, and Nancy Marchand’s wise and pragmatic Mrs. Burrage. And The Europeans once again lacks fluidity in its stately scene progression, Ivory following confrontation with more confrontation – the audience is kept on its toes – but so much so that the overkill leads to a certain apathy. Walter Lassally’s images, he had just finished Heat & Dust for Ivory, are subtle, and do not drown the narrative in beauty, in this build up to their masterly EM Forster trilogy A Room with A View, Maurice and Howard’s End. AS

NOW ON CURZON WORLD AS PART OF THE MERCHANT IVORY SEASON