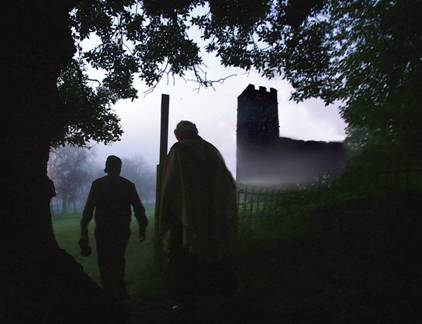 Making a funny horror movie is quite a feat but Elliot Goldner has pulled it off in his debut Britflic, The Borderlands.  After The Blair Witch Project, found footage films are always going to raise an eyebrow of contempt, but here the crackling chemistry of the leads and the well-paced sparky narrative never take the ghoulish theme too seriously, until the horrific finale eventually bites back with a nasty sting in the tail.

Made on a shoestring budget, but none the worse for it, The Borderlands stars TV regular Gordon Kennedy and Robin Hill (of Ben Wheatley fame) as spirited sparring partners: a Vatican investigator and a recording technician, who fetch up in a remote West Country village to explore the truth behind suspected paranormal activity in the medieval Parish Church, as reported by the disturbed and deeply sinister vicar Father Crellick (Luke Neil). Combining a strong sense of place in the lush English countryside with some genuinely spooky happenings, this is a film that cleverly keeps us sceptical yet on the edge of our seats right up to its devastating denouement. MT

THE BORDERLANDS IN ON GENERAL RELEASE FROM 28 MARCH 2014.