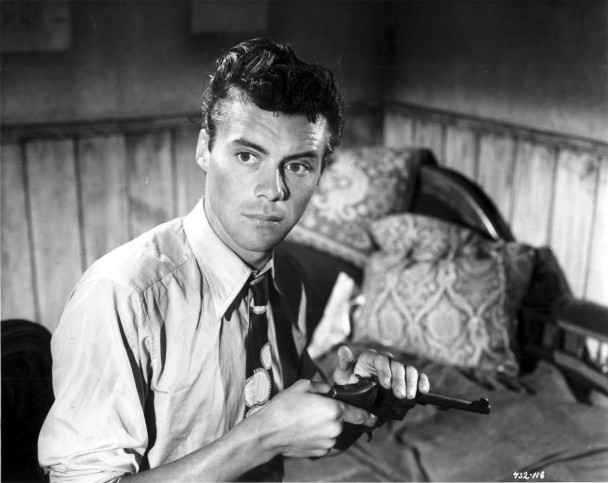 Still going today as Ealing Metro, Britain’s best-loved, independent cinema organisation, Ealing Studios, produced a dazzling array of comedies and noirish dramas during the 1940s and 50s, adding a rich vein of provocative and subversive fare to the British film canon, some of it surprisingly radical for the day.

THE BLUE LAMP was one such film that introduced the local neighbourhood ‘bobby’ George Dixon (of ‘Dock Green’ fame) who was taking a new recruit (Jimmy Hanley) through his paces in post war London when he comes to blows with Dirk Bogarde’s sadistic criminal, turning the upbeat drama into a sinister Noirish procedural thriller on the hunt for a killer, but importantly exploring the role of the Police and how they function and depend on local society, thanks to the unique experience of of its Oscar-winning scripter, T.E.B. Clarke (Passport to Pimlico) whose experience as a police officer gives authenticity to an outing which sits on the border between the studio’s dark and light sides. THE BLUE LAMP was a tough film for its time, and particularly for Ealing. There’s tragedy at its core, and a portrait delinquent youth in the shape of a mesmerising young Dirk Bogarde. Although this is a dark turn of events for a film that starting so positively,  its carries with it an indomitable message of comforting optimism and a vision of the society’s power to overcome its negative elements, that has been somewhat lost in today’s Britain.

For English acting legend Dirk Bogarde (The Servant} THE BLUE LAMP was to bring him international stardom , and for Jack Warner a role in iconic police drama of the day, Dixon of Dock Green, which was inspired by this most famous of British Police films. Basil Dearden would go on to direct The League of Gentlemen ten years later, another crime drama but this time centring on a bank robbery, and much lighter in tone.

London after the Second World War: Long-serving policeman PC George Dixon (Warner) and his latest recruit (Hanley) go about their daily routine. When they arrive at the scene of a botched robbery at the local cinema the old policeman confronts the villain (Bogarde) and subsequently gets caught in the crossfire. In a rare turn of events the community and the underworld work together with the Law, to track down the villain and mete out the punishment he deserves.

NOW ON TPTVENCORE and Bluray