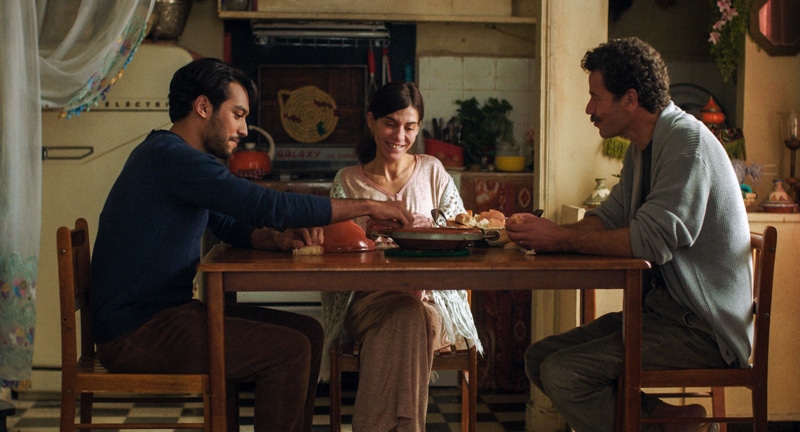 The Blue Caftan (2022) Un Certain Regard

The ancient craft of caftan styling is at the heart of Maryam Touzani’s sophomore feature, a slow-burning sensuous Magrebi menage a trois competing in the this year’s Un Certain Regard sidebar at Cannes Film Festival.

Halim (Bakri) and Mina (Azabal) run a traditional caftan atelier in one of Morocco’s oldest medinas. Fashions are constantly changing and the married couple are aware of a need to cater for a more demanding clientele. But their decision to take on a new apprentice (Messioui) will have intriguing consequences for the business and their own relationship. Saleh Bakri and Lubna Azabal have a mesmerising chemistry as the couple at the centre of the story, but Messioui is also captivating in his feature debut performance as the gifted but impetuous young apprentice very much in tune with modern sensibilities.

The Blue Caftan is a drama as indulgent and intricately woven as the silky garments themselves. Touzani’s first feature Adam focused on love in a Casablanca bakery and this is another domestic tale of local craftsman that speaks to tradition while keeping pace with the modern world. Esentially a three-handed chamber piece the film occasionally ventures out into the sunbaked streets and hazy hammams of its coastal location, Touzani delicately teasing out her layered character study that will reveal a subtle love story that works both as a gay awakening piece and a testament to enduring marital love. And apart from the meticulous lensing the clever premise is why this sumptuous drama is so enjoyable, albeit a little over-wrought – like the old-fashioned caftans themselves – in the final heart-rending scenes. MT