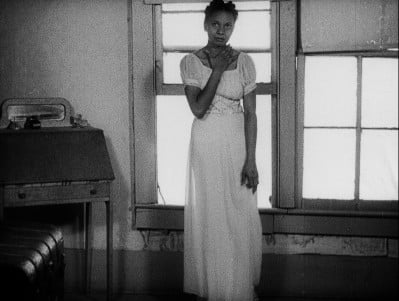 A remarkable film located between Green Pastures and Cabin in the Sky, made all the more remarkable because it centred on the experience of a woman.

At the end the possibility lingers that the whole thing was a hallucination and the marked disparity in style between individual scenes was swiftly confirmed by a quick search of Wikipedia which reveals that the scenes of heaven were actually lifted from an Italian film made twenty years earlier.

The silent influence can also be discerned by imagery like the angel wearing a huge pair of wings which suddenly appears in a fashion reminiscent of Melies; which also has the advantage of making the contrast with the documentary-style footage of urban black nightlife over eighty years ago doubly striking. @RichardChatten