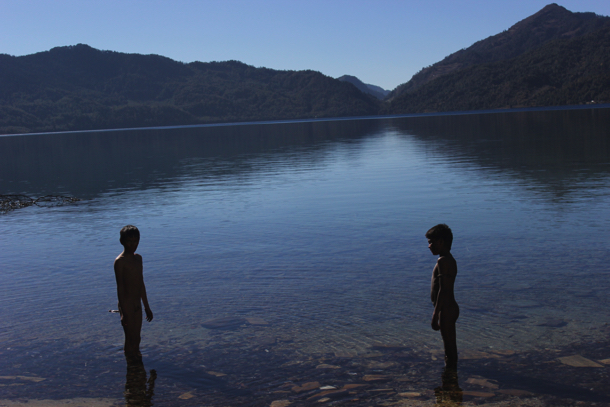 First time director Min Bahadur Bham explores an intense story of friendship in the midst of a civil war: The Black Hen is set in 2001, during the Maoist insurgency in Nepal from 1996-2006. The conflict cost over 13 000 lives – over twelve per cent were children who had to join the Maoist forces, often against their will.

Prakash (Nepali) and Kiran (Rokoya) are school friends at their primary school, divided by classes: Prakash’s  father is a poor peasant, whilst Kiran’s belongs to the wealthy ruling class. The boys are nevertheless the best of friends. One day, Prakash’s sister Bejuli (Hamal) gives her little brother a white hen as a present. Soon afterwards she will be married, but runs off fighting with the Maoist soldiers. Prakkash’s father sells the hen – called Karishima, after a Nepalese film star – to Tenziny, whose daughter is pregnant and needs nourishment from the bird’s eggs. But Prakash and Kiran don’t give up easily: they steal the hen, and colour it black. Prakash pretends he has bought it for a good price with the money his sister left him, and his father lets him keep it. But soon the hen disappears, and the two boys stumble into a deadly battle between forces of the Nepalese Army and the Maoists, supported by China. They nearly fall out with each other, having to play dead to save their lives – but back at home, a surprise awaits them.

THE BLACK HEN is told without sentimentality, this story of friendship conquering class divides and a brutal war, is moving and full of deeply felt humanism. Prakesh and Kiran are anything but goody-two-shoes boys – they are truants who steal money for cinema tickets, and are not above picking a fight with anyone. But the hen is the symbol of their friendship, they fight for it with idealism, untainted by adult opportunism. DoP Aziz Zhambakiev excels particularly in the dream sequences, when Prakash imagines the big city, where Nepalese monks and Maoists fight their battle on the streets. Whilst the colours here are dreamy and soft, his images of the hilly countryside seem bleached out of all light, the action occurring at always dusk or dawn. Amidst the harsh reality of war, THE BLACK HEN is imbued with a childlike magic, deservedly winning the Critic’s Week Prize at Venice Film Festival 2015.AS

ON RELEASE FROM 9 DECEMBER 2016 | CURZON CINEMAS