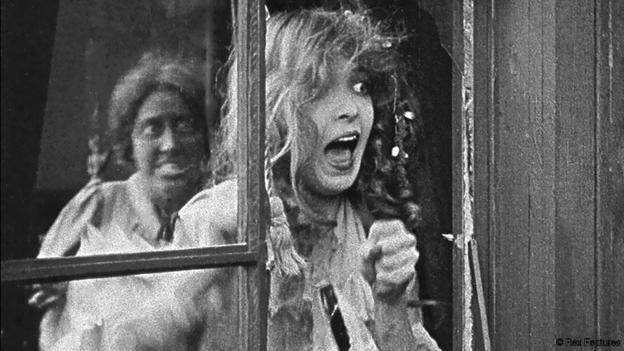 It will always be problematic to write about D.W. Griffith’s The Birth of a Nation. This epic established that the structure of classical Hollywood filmmaking is also embarrassingly racist. There are probably films that have been more prejudiced against black Afro-Americans than Griffith’s. Indeed you could argue that the cumulative effect of all those cheerful black mamas, shoe-shine guys and hotel porters, in some treasured and many deservedly forgotten B pictures, was a deadening patronisation far worse than Griffith’s crime. But unfortunately The Birth of a Nation stands out as significantly reprehensible of racism, historical distortion and bias because of its content and sensitive context – The American Civil War -and its reconstruction of the South.

The film was adapted from The Clansman by Thomas Dixon. From the online extracts that I’ve read that book is horribly discriminating in a bestial sense. Griffith had to tone things considerably down for his film (yet that doesn’t redeem him). Then the story is that Dixon saw a pre-view of The Clansman film and was so impressed that he wanted it re-named The Birth of a Nation.

With one stroke the film’s authority was set in stone. This was not, according to Dixon and the public who flocked to it, all about the beginning of a unified nation but the birth of a white supremacist one. Griffith’s film is a skewed historical document for the America of 1915 that was even endorsed by President Woodrow Wilson. Back then there were marches, protests and the arguments began. Even today with America’s current president Donald Trump having supporters in the Klu Klux Klan (they are the rescuers of the whites of the film) controversy still hangs over this landmark picture.

Yet I wouldn’t ever advocate for the suppression of The Birth of a Nation. If it had been a bad film its embarrassments would have consigned it to the dustbin of history. But The Birth of a Nation is a remembered masterwork still taught at film schools, though rarely screened at public cinemas. Screenings should be allowed to go ahead with a discussion – before and after – to place the film in its cultural and historical context.

The politics of The Birth of a Nation has to be confronted. As great a director as Griffith was, I do wish that somebody had been on hand as an advisor during the film’s production. If only he’d been told not to pursue certain trains of thought in the post-war reconstruction scenes and resisted sentimental memories of his Southern upbringing.

The pursuit of the white girl, by the black Gus (Walter Long) trying to escape a probable rape and therefore miscegenation, is both ludicrously overdone and disturbing – she throws herself of a cliff to escape her fate. And the cartoonish depiction of black men, in the senate house, eating chicken legs and leering carnally at white women was a mad artistic decision. These moments plus some repugnant inter-titles make you cringe. All’s not so well dramatically in Part two until its terrifically well shot and exciting chase – though it’s the triumph of the Klan who’d previously lynched Gus. Yet we do have Part 1 (the film’s better half morally as well as technically) where the aesthetics of The Birth of a Nation have to be experienced by all who love cinema. Here Griffith’s astonishing refinement of his earlier innovations is now welded by his groundbreaking editing. From here on Hollywood cinematic narrative emerges.

This is the birth of almost all of the feature film language of the international art / industry commerce that we now know as Hollywood. Once Griffith had established film grammar and syntax then the niceties of technique were refined – especially the use of the iris viewpoint, dense visual information contained in the frame, extensive use of panning shots and the handheld camera: a memorable moment being the shot beginning with a mother huddling children on a hill to slowly pan to an advancing army. Like a symphony Griffith established a rhythm (or musical beat) for filmmaking (Though tempo is made more complex in the multiple story viewpoints of Griffith’s next, and in my opinion, greater film Intolerance.)

The Birth of a Nation has such delicate felicities of feeling that demonstrate Griffith’s skill and intuitive intelligence with actors. If the blacks are sadly on the level of caricature, then the whites are given humanity – we really do care about the fate of the Stoneman and Cameron families of the North and South. Of course Griffith had the lovely Miriam Cooper, Mae Marsh and the incomparable Lillian Gish. Their acting and presence still sparkles in a film now just over a century old.

I am sometimes wary of the tinting of silent films but for the BFI’s blu-ray edition I have nothing but praise for the subtlety and care with which they’ve gone about this restoration. There are a generous amount of extras in the form of Griffith shorts, interviews and discussions. This feels like a definitive edition. (A small footnote -Raoul Walsh plays John Wilkes Booth the assassin of Abraham Lincoln and John Ford rides with the Ku Klux Klan!) Alan Price.

NOW OUT ON BLURAY COURTESY OF BFI FIMS