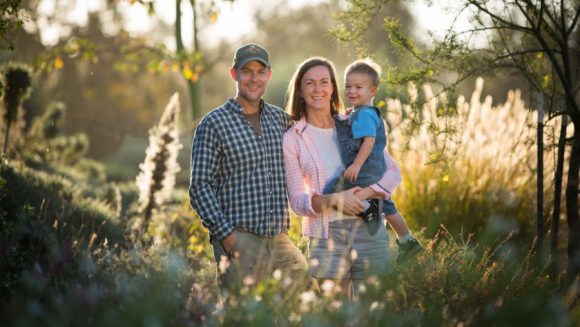 Thinking a making a success of sustainable farming? – it’ll take around a decade. These could be the best years of your life – and you could make you thousands of pounds worth of produce. Indie filmmaker John Chester and his wife Molly managed to do it. But creating an environmentally friendly farm – one that is harmonious with nature – is no walk in the park.

Often playing out like an eco thriller – the big bad wolves killing the chickens, amongst other murders – this is an entertaining and informative film revealing home truths and discoveries about nature, sustainability, ecosystems and extreme animal behaviour that will shock and surprise you, as it did them.

The intention to farm harmoniously with nature all started out as an accident when the couple were forced to move house due to their noisy Collie dog Todd. Molly was a health conscious An hour north of LA they found a patch of 200 acres. But the soil was as dead as the dodo – impacted and dry as a bone. Dead bee hives the result of poor eco management. This was a wilderness that needed to be brought back to life. Then Alan York an Amish style farmer cane along. Emulate how natural ecosystems work. Relying of a finite source of water from a well.  The soil needed regeneration, hydration and fertilisation. The plan was to break up the earth and create a heal-basis for growth. And s harmonious environment with cover in the form of trees.

To help them in their endeavour Molly and Alan invited volunteers from all over the world to get the endeavour under way with worms, irrigation, composting and then replanting. Then cane the animals. Ducks, chickens, sheep, and cows. and two livestock guarding dogs. The animals poop will bring the soil back to work. Biodiversity was almost there. They needed animals to make their soil even better.  A pig completed the picture. That arrived as Ugly Better renames Emma who gave birth to 15 piglets. And a ‘fruit basket’ with  75 different varieties of stone fruit came next – all sold at the local market

But the gophers and cayotes arrive and do catastrophic damage, killing over 29 chickens. they have to electrify the fence. And so begins a delicate dance of coexistence. But pests and diseases are continue disrupting this paradise. Along with the weather: fires and strong winds  And then comes the drought. “Observation followed by creativity is becoming our greatest ally” says John at one point.

The sting in the tail comes in the eventful third act. And in the form of illness, for both man and beast. And once again it’s about harmony and balance,  and Mr Greasy, a rejected old rooster  with a dapper red comb who comes to rule the roost. John also realises, to his chagrin, that violence becomes a necessary evil that he hoped he wouldn’t have to resort to. To control the enemy is to kill it. Gradually a delicate ecosystem comes together as John and Molly welcome a child of their own into the world. “The dance may be familiar but the partners are always changing”.

Enriched with hand-drawn animated sequences and a lively, if sometimes overbearing, score. wildlife cameraman John reveals the wonder of nature in a stunningly captured visuals and time-lapse photography. The Biggest Little Farm is an extraordinary journey, it’s battles and joys mirroring life as a whole.