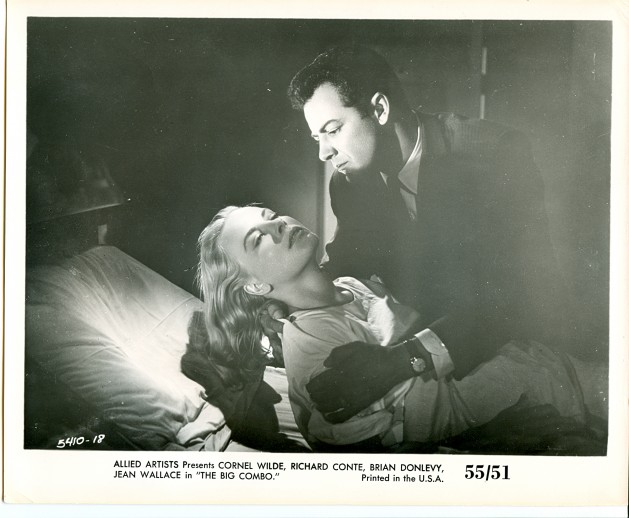 “I live in a maze, Mr. Diamond, a strange, blind and backward maze. All the twisting paths lead back to Mr. Brown.”

That is platinum blonde Susan (Jean Wallace) delivering Philip Yordan’s deliciously noir dialogue in Joseph H. Lewis’s THE BIG COMBO. Police Lt.Diamond (Cornel Wilde) not only loves Susan but is trying to expose and destroy the “combo”, a money – laundering / lending criminal banking system run by the sadistic Mr. Brown (Richard Conte). And the police’s only hope of evidence for this, and a murder rap, is to trace Brown’s wife Alicia (Helen Walker) now hidden away in a sanatorium under another name.

Susan is not a femme fatale; most of her screen-time she is an observer in a drugged, confused, almost dream-like trance: swaying dangerously between the sexual infatuation of Diamond and Brown, caught as Brown’s mistress, yet never actively Diamond’s lover. Although it is never explained why Susan (a ‘society gal’ and ex-concert pianist) was drawn to Mr. Brown, Jean Wallace’s captivating performance allows us to acutely feel her entrapment and vulnerability. Indeed, although the principal characters of The Big Combo are morally reprehensible, we experience such empathy for them that they retain our sympathy in spite of sleazy and brutal acts of torture and killing.

Take Joe Mc Clure (Brian Donlevy) the ineffectual second in-command of the mob. When he sees that Mr. Brown’s time is over, he thinks he persuades Brown’s hired killers Fante (Lee Van Cleefe) and Mingo (Earl Holliman) to dispose of the boss. But it’s Brown who ends up instructing the killers to make Joe their target. Joe wears a hearing aid that’s pulled from his ear moments before his killing. From his point of view, we witness (in a quasi- surreal shot) the killers letting their machine-guns rip, with the sound now poignantly silenced. 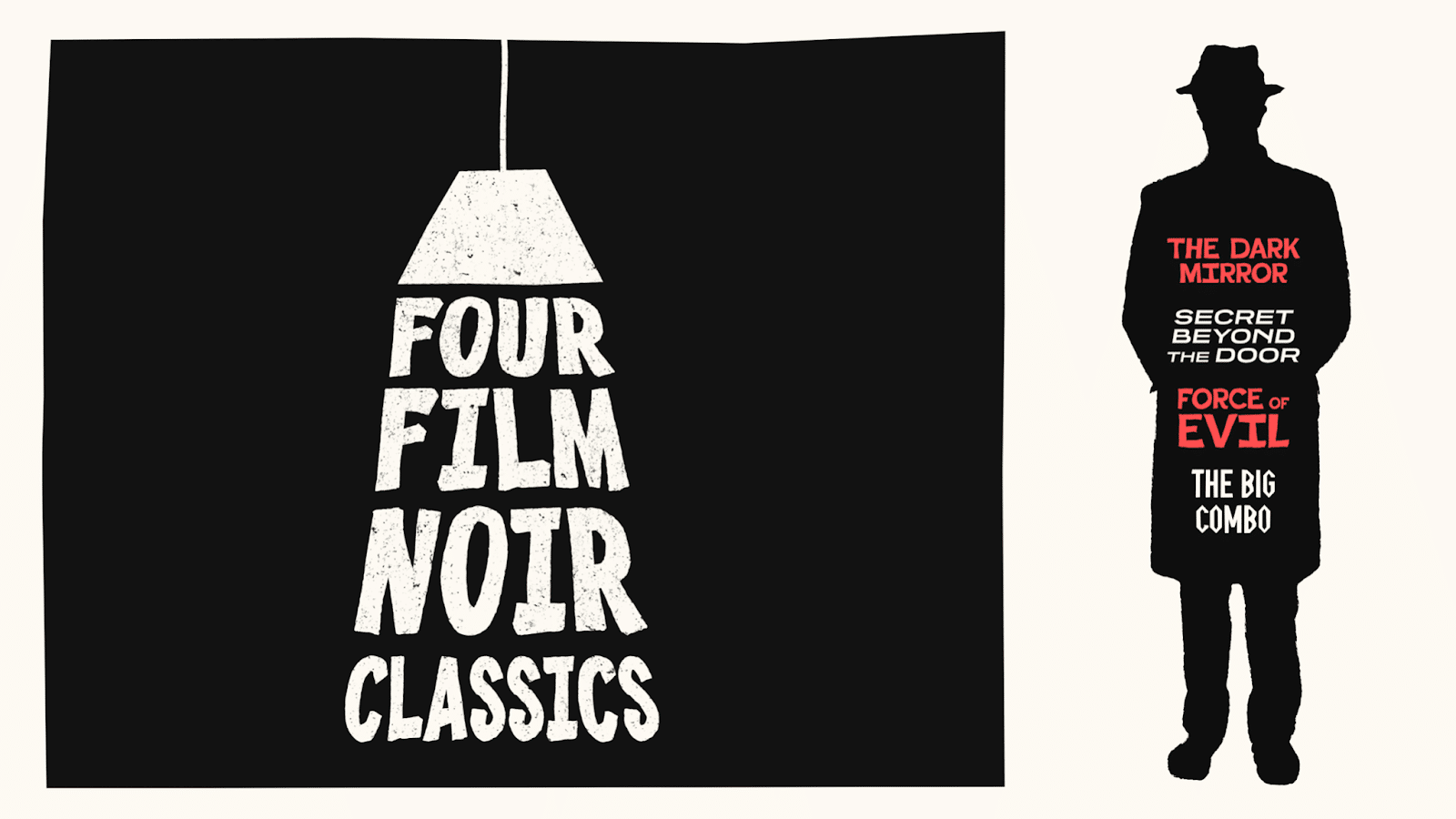 Joseph H. Lewis always sought fresh ways to film conflicts. The Big Combo murder has a dreamy look that is an early throwback to Susan’s expression, before she faints, in the arms of an old music professor. Jean Wallace’s expression, the angle of her body and overall look are suggestive of a Man Ray photograph. Even the film’s opening is executed with style. Susan is not so much pursued by Brown’s men than engaged in a ‘balletic’ struggle paced by David Raskin’s fine jazz music. Proceedings are interrupted by the camera rapidly panning to an outside street diner consciously modelled on an Edward Hopper painting.

These touches probably annoyed Lewis’s producers who never appreciated the ‘fancy stuff’ and just wanted things done cheaply and quickly. Yet what probably disturbed them more were the risqué elements (for 1955) of The Big Combo. Though it is never graphically depicted, oral sex, between Mr. Brown and Susan, is certainly suggested. And the partnership of Fante and Mingo (separate beds in the same bedroom) signals a close gay relationship.

However the most powerful operative auteur in The Big Combo is probably cinematographer John Alton. His work has been praised for its masterly lighting and staging. Big Combo’s torture scene echoes a similar scene in Mann’s 1954 film T-Men (another Alton assignment) and looks forward to the Anthony Perkins cupboard-room interrogation in Welles’s The Trial (1962). Alton provides a menacing and sparsely lit inky darkness that wonderfully heightens the screen violence. The fog sequence at the climax of The Big Combo is probably the most thrilling element here.

Lewis wanted to convey an airport setting. Difficult when confined to a studio and having little cash. So Alton simply told Lewis to drape the whole set in black velvet, create a fog and have a constant revolving light. Critics have remarked that this reminds them of the airport ending of Casablanca. Yes, in black and white cinematography terms it does. But the ending of The Big Combo is anti-romantic, even despairing. The fog scenes it really emotionally connects with are those to be found in Antonioni’s The Red Desert and Identification of a Woman. If there’s a final sense of existential loneliness and uncertainty then the fog metaphor powerfully feeds into Susan’s neurosis that she’d been trapped in a maze created by Mr. Brown. Susan turns the car headlights on Mr. Brown (struggling in the fog) in an attempt to pin him down and free herself from the maze of the Combo nightmare. The fog may eventually clear, but for Lewis and Antonioni the characters remain decidedly shaken and lost.

Lewis’s four late illustrious films The Big Combo, Gun Crazy, The Halliday Brand and Terror in a Texas Town are minor masterpieces of B picture production values, containing a visual density of information worthy of study by aspiring filmmakers, for their mise-en-scene is both emotionally complex and remarkably crafted.

As for aspiring cinematographers, they should examine Alton’s work of the 1950s. Indeed, also read his seminal book on photography Painting with Light. And Richard Conte delivers a ruthlessly intelligent performance that should be a model villain for actors whether in B pictures or blockbusters.

Whilst for all who simply love the dark pull of film-noir, The Big Combo is a brilliant expression of its elements. Arriving near the very end of the classical American noir (Welles’s Touch of Evil is probably that) this is a heady irresistible nightmare that you perversely don’t want to come to an end. Let the fog never lift!  Alan Price©