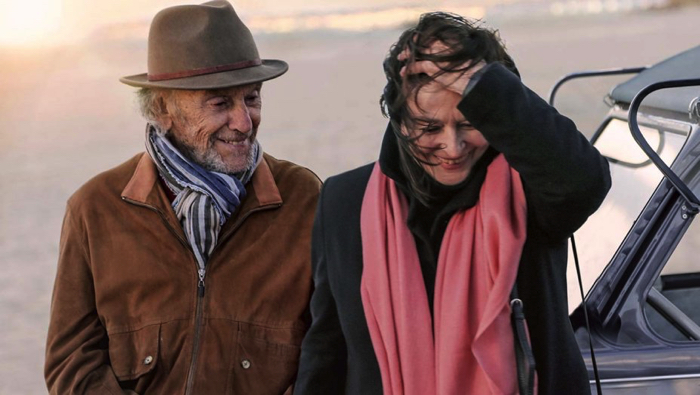 Claude Lelouch’s cult classic with its breezy romantic score by Francis Lai is one of the most popular French films ever made. Even the title harks back to that “ou la la! moment when your French lover sweeps you off your feet in a cosy bistro savouring a post prandial Cointreau.

Well that was back in 1966 but this sequel feels surprisingly slick and contemporary. Now in his 80s, ex racing driver Jean-Louis Duroc (Trintignant at 89, for the un-initiated) is in a swish Normandy care home – infinitely more appealing than the ones BUPA charges £100k a year for, even the staff are sexier.

The Best Years of a Life (Les Plus Belles Années d’une Vie)sees Jean-Louis considerably more dishevelled but the cheeky twinkle in his eye is still there as he flirts with his carer and wanders around the foothills of dementia – or is he just having us on?. Meanwhile his long-lost love, a well-preserved Anne Gauthier (Aimée, an amazing 87) is running a small shop and enjoying her daughter and granddaughter. His son Antoine (Antoine Sire, now grown up since his childhood role) persuades Anne to visit his father. Jean-Louis pretends not to recognise her at first – she is still the diffident one, and he is still a bit of a rascal. Lelouch, now 81, clearly understand Jean-Louis, and his script is insightful and extremely convincing for anyone who has a father of this age. And as the two go back down memory lane, Lelouch cleverly splices extracts from the original film: the lovers cavorting on the beach and laughing with their kids. Lelouch has even added footage of an exhilarating drive through Paris in the early hours of the morning, and layered it over images from his other films. In a way this is the director’s chance to bring his 1966 film back to life and offer a plausible and authentic conclusion to the story, attracting nostalgic older audiences – and even inquisitive new ones. And although the previous sequel, A Man and a Women: 20 Years Later (1986), was not a success, this seems to have considerably more depth and understanding.

A great deal of the film is pure nostalgia, but there’s humour too and it flows along pleasantly without any awkward moments – the flirty bits do happen as men of this generation get older. You have to remember – they grew up in a completely different century.

The Best Years of a Life was made in just under two weeks, showing how the veteran director and his ageing stars are still capable of being impressive. And with its timely themes and the impressive car sequence it competes favourably with anything in the competition line-up. MT