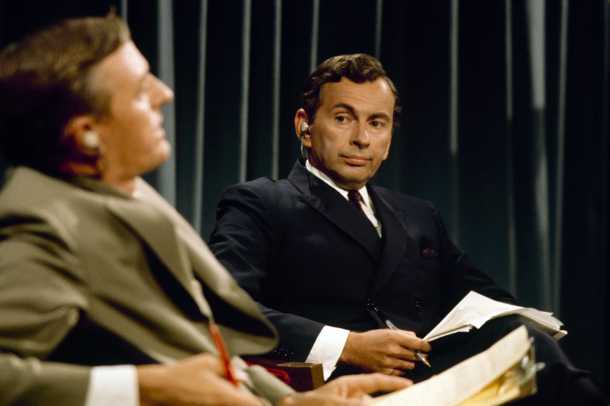 In THE BEST OF ENEMIES Morgan Neville and Robert Gordon showcase the heavyweight intellectual TV sparring matches between William Buckley Jr and Gore Vidal, who offered their subjectivity on American Politics during 1968 and fro the last few decades of the 20th Century. Whether or not you agreed with their politics these wittily-crafted debates and well-reasoned arguments, spoken in cool patrician vowels, had US viewers pinned to their sets night after night from the late sixties until the nineties.

Best known for their musical biopics, Neville and Gordon take us on a rip-roaring ride through the lives of both men who had the American public hanging on their every word. Millions of viewers were fixated on their TVs each night, as Buckley, an ardent Republican and Vidal, a champagne socialist, expounded their views like an elegant game of Centre Court tennis. At a time when America needed to “change lanes”, the debates allowed a refreshing breeze of clarity to blow through the political landscape, but culminated in a famous exchange during news coverage of a convention in Chicago (1968), where Buckley finally puts his cards on the table during a highly-charged debate that went down in American history.

Multi-lingual William H Buckley Jr was a staunch Catholic from an educated New York family who went to Yale and spent the Winters in a chateau in Gstaad or sailing at his Stamford holiday home. Gore Vidal, seen posing in his romantic Italian coastal villa, was also from a privileged background with political connections although he never went to University, going straight into the Army, as did Buckley after Yale. The two went on to publish books and newspaper articles – Vidal becoming the best-selling author of the controversial sex-change novel “Myra Breckinridge” – Buckley set up his right-wing journal National Review and became the host of a NewsNight-style programme called The Firing Line.  The two were polar opposites and would argue that black was white just to affirm their antipathy of one another. We also hear off-scene readings from John Lithgow (as Vidal) and Kelsey Grammer (as Buckley) and the late Christopher Hitchens’ adds his commentary further enhancing and inform our enjoyment of this immersive piece.

Slowly ramping up the tension as their gripping story unfolds, Neville and Gordon reveal that ABC-TV, lagging third in the news division behind CBS and NBS, had decided to up its game by hiring these sworn enemies to host a talk show during a convention in Miami. Grainy footage of these coruscating debates make gripping viewing as they each appraise the political situation of an American Society in crisis. When the debates reconvened in Chicago, the tone became more venomous between the men, reflecting a mood of hostility and social unrest that descended on the town at the height of the anti-Vietnam War, in a draconian Police presence. Theatrical texture is added with footage of Paul Newman and Arthur Miller who were also in town at the time. Discussion of the riots seeps into the coverage as these cool intellectuals lock horns, Vidal calling Buckley “a crypto-Nazi.”  Rising to the occasion, Buckley is seen gurning with hatred –  and the image is repeated several times – as he barks back “Now listen, you queer, stop calling me a crypto-Nazi or I’ll sock you in your goddamn face, and you’ll stay plastered.”

When seen on video footage, Buckley was clearly devastated at having lost his cool and apologized profusely but Vidal is strangely unphased with an icy coolness that is itself unnerving given the hatred he clearly felt. Vicious law suits zapped back and forth like angry hornets between the two men for years afterwards, as they each endeavoured to work through this televised trauma.

Ultimately, Gordon and Neville’s documentary serves to illustrate how Buckley and Vidal were the last to deliver  stimulating debates of intellectual clarity on television. Nowadays, networks resort to “that which is highly viewable rather than that which is illuminating”. What a shame. MT