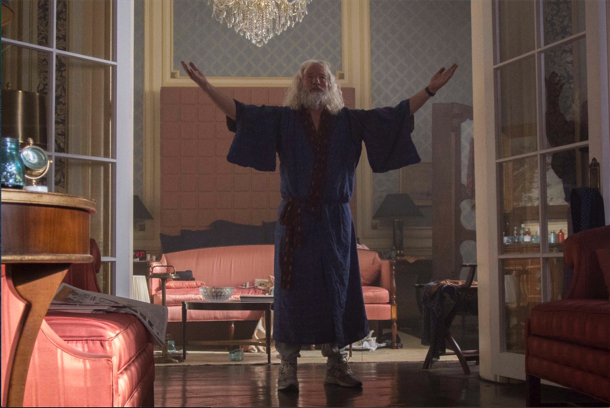 Richard Gere is back as the richest swinger in town. A kind of ageing Bill Gates, the successful batchelor iss using his millions to help sick children in Philadelphia together with best buddies Bobby (Dylan Baker) and Mia (Cheryl Hines). But tragedy leaves him the sole survivor of a car crash while the three are out driving and suddenly all he has left  is their teenage daughter Olivia (Dakota Fanning), who blames him for the accident.

Fast forward five years and he’s morphed into a jovial bohemian who now looks like a cross between Gandolph and Karl Lagerfeld. Olivia is back in the story, pregnant and partnered with a pleasant young doctor, Luke (Theo James) and keen to reconnect with an old guy who was close to her parents. One hair cut later and some exquisite tailoring and Franny (Gere) is leading the band at the hospital opening shindig where James is now working as the latest doctor on the team.  Never one to be stingy, Franny is buying the couple Olivia’s childhood home as a present. But when the trio swing up to the empty property in Franny’s vintage Mercedes, the young couple are distinctly shocked and strangely underwhelmed. Olivia accuses him of being too dramatic. And it’s true: Franny is a character desperately wanting to be loved but without really loving. Gere plays him as an ebullient maverick who drinks too much and loves to play the slightly cheesy fool. Fanning plays her usual intense and enigmatic blond, looking limpidly into the distance, often on the verge of tears. James is sardonic, in his usual standoffish way. In trying to create the same chemistry he had with Olivia’s parents, Franny makes himself unpopular, forcing his unwelcome fatherly condescendence on them and feeling utterly unauthentic in the process. The rather sketchily-drawn support characters do their best but it all feels quite threadbare and hollow. Gere’s character is the only one that’s fully fleshed out: a cleverly-disguised control freak who hides his abusive narcissistic neediness behind a flashy cloak of bravado. Controlling the couple by a series of never-ending gifts and largesse, he holds them in the palm of his hand. Gere is hopelessly miscast here, but an actor like Robin Williams would have been just right.

Things get worse as the films plays out, with Fanning, a capable and strong actress, literally being faded out of thr storyline, as the remaining mismatched gruesome twosome of Gere and James finding themselves lost in a drama that just becomes tedious. Despite Renzi’s best intentions THE BENEFACTOR slowly disintegrates, its promising elements overtaken by Gere’s antics as an unconvincing antihero in a drama that has lost its way. MT

NOW ON GENERAL RELEASE FROM 27 FEBRUARY 2016