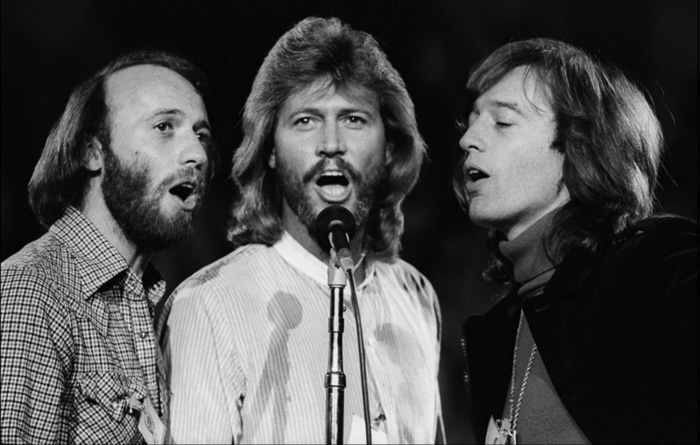 In this new biopic on HBO Frank Marshall takes on a mammoth task in charting the rise to fame and fortune of the legendary brothers Gibb. The Bee Gees: How Can You Mend a Broken Heart shows how three guys from Manchester via the Isle of Man and Australia went from crooning popular ballads to the pulsating falsetto phenomenon that was Saturday Night Fever, as the ‘Kings of Disco’. The band were active for several decades generating one hit after another – over a thousand, including 20 No. One Hit singles – across a wide variety of genres.

In all started when brothers Barry, Maurice and Robin Gibb made up the trio taking over from The Beatles. The Bee Gees were Britain’s answer to the Osmonds and the Jackson 5, writing, harmonising and performing their own repertoire of songs and folksy ballads that included: Massachusetts, Words, and I’ve Just Gotta Get a Message to You. They had big hair and big teeth to match, and megawatt smiles.

A simple low budget disco hit of 1978 was the turning point of the ‘boys’ career. Masterminded by their producer Robert Stigwood and starring a snake hipped John Travolta, it captured the imagination of the New York press and set fire to a sizzling string of chart-topping, best-selling hits that had everyone jiving. Suddenly we were all rocking a Kevin Keegan haircut, and wincingly tight Satin trousers (the girls drawing the line at hairy chests). The Bee Gees music was percussive and dance-worthy but always deeply tuneful and their harmonies were made in heaven.

After a brief sashay through the 1960s and early 1970s, the film dedicates most of its running time to how band’s music achieved its famous sound after the producers arrived in the wake of the disco fever. We hear from Eric Clapton  whose input proved vital in moving the brothers to America in the mid 1970s and whose band Cream was also managed by Stigwood. Stateside they discovered a revitalising vein of creativity. Producing gurus Karl Richardson, Arif Marden (Atlantic Records), and Albhy Galuten emerge as the major musical facilitators behind the scenes providing engaging insight, particularly for those unfamiliar with their talents, and that included the lesser known band member Blue Weaver.

Barry Gibb is now the sole survivor of the Bee Gees and provides a thoughtful spokesman for the family’s eventful trajectory. From his home in Miami he comes across as a sensitive soul seemingly unaffected by superstardom, and reflecting poignantly on a past touched by the bitter rivalry of his younger (twin) brothers Maurice and Robin. Another clan member in the shape of Andy enabled the band to generate teenage fans with his own material, but he sadly lost his battle with addiction at only 30 (in 1988).

Enriched by interviews and archive footage, the only missing element is the romantic counterpoint so familiar in musical biopics (where were the groupies, the wives and the lovers? only Maurice’s first wife Lulu appears in interviews). The only surviver Barry Gibb emerges a unexpected musical hero who is still musically active and was awarded a Knights Batchelor for his services to the industry in 2018.

Surprisingly The Bee Gees: How Can You Mend a Broken Heart is the first feature length doc about the band. An intensely enjoyable experience the film contains some cracking musical performances, and there’s much to discover about the brothers’ tremendous output even before they sang one falsetto note in their disco days and beyond. An ideal collectors item, then – to be revisited time and time again for the sheer dynamism of this musical archive. MT